In this episode, we’ll be hopping aboard replicas of historic ships like the HMS Beagle and the Nao Victoria, and imagining what it would’ve been like to cross uncharted waters like the great explorers. We’ll also be showing you around some of Punta Arenas’ main attractions including its plaza, this cool panoramic point, and its famed necropolis. And because you already know we’re major foodies, we’ll also be taking you to a few restaurants in search of steak and seafood. So let’s get this video rolling!

We kicked off the day with lunch at Parrilla Los Ganaderos, a restaurant that specializes in Chilean BBQ. You can get classic beef cuts as well as lamb, and they have numerous sides to choose from. We then enjoyed a leisurely walk along the city's waterfront and even spotted the town sign.

Later that afternoon we hopped in a taxi and travelled to the Nao Victoria Museum, which is located about 15 minutes north of town. This is an open-air museum that sits on the shores of the Strait of Magellan, and it’s where you can see full-sized replicas of historic vessels.

The idea for this museum came to be when a local businessman decided to build a replica of the Nao Victoria to celebrate Chile’s bicentennial. Well, it proved to be no easy task. The search of the ship’s original plans took almost 3 years, and it was then another 2 years to complete the construction. But today this museum is considered one of the main draws to Punta Arenas.

We first visited the Nao Victoria which first set sail in 1519 as part of a Spanish 5 ship expedition led by Ferdinand Magellan. The Nao Victoria was the only ship to complete the voyage and in the process became the first ship to successfully circumnavigate the globe. It’s crazy to think that 500 years ago, people would have crossed entire oceans aboard a vessel just like this one!

We also visited the replica of the HMS Beagle, one of the most famous vessels in history. During its first voyage, the HMS Beagle carried out a hydrographic survey of Patagonia and Tierra del Fuego, first under the command of Pringle Stokes and later Robert Fitz-Roy. It was during this voyage that the Beagle Channel was identified and named after this ship. Later, during the Beagle’s second voyage, a young Charles Darwin would travel aboard, and we all know how he revolutionized science with his discoveries.

The following day, we decided to explore the city of Punta Arenas focusing on the downtown core. Our first stop of the day was the Cathedral of Punta Arenas, and from there we crossed over to Plaza de Armas, also known as Plaza Muñoz Gamero, which is the town square. Here you’ll find the sculpture of the famed Portuguese explorer Ferdinand Magellan. He achieved the first European navigation from the Atlantic to Asia, and the Strait of Magellan is named after him - that’s the natural passage between the Atlantic and Pacific oceans.

Then it was time for lunch and we chose a restaurant called La Luna which specializes in seafood! This was hands down one of the best meals we had in Chilean Patagonia. I only wish we'd found it sooner so that we could have come back a few more times to try everything on their menu. We ended up getting the sampler tray, which came with 6 different dishes that featured everything from scallop to calamari, and salmon ceviche to King crab.

And that's basically how we spent 48 hours in Punta Arenas, Chile! This city has quite a bit to offer, so if you find yourself travelling through Chilean Patagonia, give yourself a few days to enjoy what it has to offer. 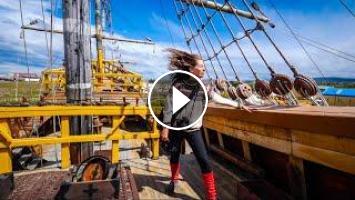 Today we're going to be visiting Punta Arenas, the capital city of Chile's southernmost region, Magallanes and Antartica Chilena. In this episode, we’...