To submit a question for the panelists during the broadcast, visit the event page:
https://festival.newyorker.com/page/1631225/custom-tab

This session is offered as a free community event. If you wish to make a contribution to our charitable partner, the New York Community Trust, we encourage you to learn more:
https://www.nycommunitytrust.org/covid-19-response/

Jonathan Franzen, a frequent contributor to The New Yorker, is the author of five novels, including “Purity,” “Freedom,” and “The Corrections,” and five works of nonfiction and translation, including “The Kraus Project” and “Farther Away.” His most recent collection of essays, “The End of the End of the Earth,” was published in 2018. Franzen is the recipient of a National Book Award, for fiction, and the EuroNatur Prize, for his work in conservation.

Elizabeth Kolbert has been a staff writer for The New Yorker since 1999. “The Climate of Man,” her three-part magazine series on global warming, garnered a National Magazine Award for Public Interest, among other honors. Her books include “The Sixth Extinction: An Unnatural History,” which won the 2015 Pulitzer Prize for general nonfiction; her newest book, “Under a White Sky,” will be released in 2021. She is also the recipient of a Heinz Award, a National Magazine Award for Reviews and Criticism, and a Blake-Dodd Prize.

Bill McKibben is a contributing writer for The New Yorker and the author of the publication’s weekly Climate Crisis newsletter. He is the founder of the international grassroots organization 350.org, which tackles climate change, and he also serves as the Schumann Distinguished Scholar in environmental studies, at Middlebury College. Among the many honors he has received are the Right Livelihood Award, sometimes called the alternative Nobel Prize, and the Gandhi Peace Award. His most recent book, “Falter: Has the Human Game Begun to Play Itself Out?,” was released last year.

Carolyn Kormann has been a New Yorker contributor since 2012 and a staff writer since 2018, covering science, the environment, and climate change. Her writing has also appeared in Harper’s, Porter, and VQR, and has been included in the Best American series. She is the recipient of a James Beard Award for best food coverage, an Abe Fellowship from the Social Science Research Council, a Middlebury Fellowship in Environmental Journalism, and a fellowship from New York University’s Center for Latin American and Caribbean Studies. 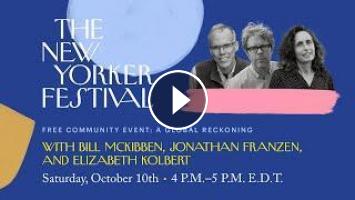