Hello Everyone. Thanks for joining me Michelle in this English speaking lesson we are learning “Phrases for Dating & Relationships”. These English phrases would help you to talk about Dating and relationships confidently in English.

Go out with somebody
Meaning: it means that you’ve been meeting with that person on repeated occasions, you’re getting to know each other.
Example: “Rachel isn’t single. She’s been going out with a guy from work since January.”

Whirlwind romance
Meaning: A very intense romance that starts off strong and usually is unexpected.
Example: “Tom and Mary had a whirlwind romance last summer. It didn’t last though. They broke up last week.”

To be set up
Meaning: When a friend arranges a date for you with a person he knows.
Example: “John set up Tom with Mary -a woman he knows from church. They have been dating for a month now. Surely Tom owes John a favor.”

To be serious
Meaning: A person is described as “serious”, in terms of his relationship, if he thinks it will last long and that it could lead to marriage.
Example: Are you serious about your new boyfriend is what I asked betty, Are your going to marry him? and she laughed at the idea of them getting married.”

“Betty doesn’t seem to be serious about her new boyfriend Matt because she doesn’t talk about him much.

To have chemistry
Meaning: To get along well with a person you are dating or considering dating.
Example: I think she is really pretty, but we have no chemistry together. We went on a date and there was a lot of awkward silence.

To hit it off
Meaning: To get along well with another person very well – share a nice time together
Example: I really hit it off with that girl from the office on our first date. We had a great time.

To break up with
Meaning: To end a relationship with a boyfriend or girlfriend.
Example: “Cindy broke up with my brother because he watches football all day. She felt very neglected.”

To break it off
Meaning: This is another term for ending a relationship with someone.
Example: “Donald decided to break it off with his new girlfriend when he found out that she hates dogs.”

A stalker
Meaning: A person who follows someone else around in an unwanted way. Many times it is a man who is obsessed with a woman and won’t leave her alone.
Example: “My sister’s ex-boyfriend turned out to be a stalker. When she went out with her friends he would follow her to see what she was up to.”

To have a lot of baggage
Meaning: To have existing issues and problems that may affect the relationship.
Example: You’ll generally be advised to be careful if you plan on dating somebody. Because some people have baggage from a previous relationship or marriage. 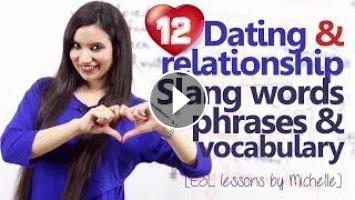