ava
We're taking you on a day trip to Callao from Lima! In this video, we'll explore some of the main attractions in and around La Punta. We'll tour a fortress that once defended the port from pirates, we'll walk down the colourful streets of Zona Monumental del Callao, we'll climb into a Peruvian submarine, and we'll end the day with some delicious Italian food. So let's kick off this day trip!

Places we visited in Callao:

Fortress Real Felipe:
This fortress was built during the Viceroyalty of Peru, when Callao was the main port of the Americas and connected the colonies with Spain. At that time, there was the threat of pirates and corsairs, and in fact, due to inadequate defences, several pirate attacks did take place. When in 1746, a powerful earthquake and a tsunami that followed destroyed most of the existing defences, the viceroy ordered this fortress to be built. And this would become one of Spain’s most important constructions in the New World.

Peruvian Army Museum:
At the end of our visit, we went inside the Peruvian Army Museum, which has one section dedicated to the Incas and their art and culture, and another one showcasing historical uniforms, weapons and other military paraphernalia.

Zona Monumental del Callao:
Next, we walked around some of the side streets just outside the fortress. As you can see, this is a historic area that has kind of been overlooked and neglected for a long time, but slowly, certain areas are starting to come back to life - even if it’s one street at a time. Our first stop was Zona Monumental del Callao. This is a colourful up-and-coming area featuring lots of street art, independent shops and restaurants. The glass covered gallery formerly known as Casa Ronald, is now an art hub featuring various exhibitions ranging from photography to murals to sculptures.

Abtao Peruvian Submarine:
Then we spotted a submarine, so we took a small detour to check that out before going to lunch. Because I mean, how often do you get the chance to explore a submarine up close and personal? This was one of four submarines for the Peruvian Navy that were constructed in the United States based on US Navy's Mackerel class submarine. These were the last submarines constructed by the US for the export market. Abtao served for 48 years in the Navy and made 5003 dives. It was decommissioned in 1999 and in 2004 it became the first floating museum in Latin America.

Taller Razeto
For lunch, we went to Taller Razeto. This is an Italian restaurant and because our relatives are friends with the owners, we first visited with them and also met their cat! We ordered a prosciutto pizza and spaghetti a la puttanesca. We were both very happy with our meals! And for dessert, we tried a few different desserts including the pecan pie, the Nutella cheesecake, and the homemade tiramisu - each one better than the next! 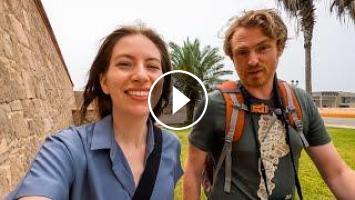 We're taking you on a day trip to Callao from Lima! In this video, we'll explore some of the main attractions in and around La Punta. We'll tour a for...