lily
Come join us for a 3 Course Buddhist Meal in Seoul, Korea as we try eating Korean Vegetarian Food for the first time on this trip. Normally, we eat Korean Food we have some kind of meat or seafood with lots of spices and seasonings so it was fascinating to try something a bit different.
Davids' Channel:
To kick things off we visited the War Memorial of Korea (전쟁기념관) located in the Yongsan district of Seoul. This massive museum, built on former military headquarters, focuses on the military history of Korea with a goal to educate future generations to prevent future conflicts with a goal eventual reunification of the Korean peninsula. The museum features an impressive 13,000 items and would take a half-day to properly explore; however, during our brief visit, we enjoyed getting up close to former military equipment and vehicles as well as the interactive displays highlighting the Korean War.
For dinner we ate at a Korean Monastic Cuisine Restaurant called Balwoo Gongyang (발우공양). Our three-course meal consisted of beautifully presented small sample sizes of various bite-sized vegetarian and vegan Korean food items. Many items had very little salt or seasoning and it certainly wasn't a typically spicy Korean meal. We enjoyed certain dishes more than others; however, it was great to experience a different side of Korean cuisine.
Thanks to KTO for making this trip possible.
GEAR WE USE
Panasonic GH5:
Canon G7X ii:
Rode Video Micro:
Joby Gorilla Pod:
SanDisk 16GB Extreme Pro:
* * *
SOCIAL MEDIA & TRAVEL BLOGS
AUDREY:
blog:
instagram:
facebook:
twitter:
SAMUEL:
blog:
facebook:
twitter:
instagram:
* * *
Eating Korean Vegetarian Food - 3 Course Buddhist Meal in Seoul, Korea:
Hey guys! We are Samuel and Audrey, a vlogging travel couple from Canada. In this travel channel we share our travel and food vlogs while touring the world.
Our most recent trip was to South Korea where I embarked upon a two-week adventure without Audrey. Invited as part of a YouTube vlogging trip, organized by KTO, I spent the first week traveling with other YouTubers in Seoul, Busan and Gyeongju. My second week included independent exploration of Korea with my good friend and fellow YouTuber David of DavidsBeenHere.
Having lived and traveled in South Korea, the chance to return to one of my favorite countries was one of the biggest surprises of 2019. On this particular trip, I had an opportunity to do many things I had not previously covered including a visit to the DMZ (Demilitarized Zone between South Korea and North Korea), a Buddhist Temple Stay and a Korean cooking class. It was almost as if the program designed by KTO knew exactly what I had missed out on before.
Obviously, a huge highlight from the two weeks I spent revisiting Korea was the food. I feasted on all of my favorite Korean dishes including Korean barbecue, dolsot bibimbap, haemul pajeon, tteokbokki, bulgogi, kimbap and many others. I can honestly say that Korean food is world-class and is one of my top 5 favorite cuisines in the world. Aside from trying familiar dishes, I had the opportunity to sample raw Korean seafood for the first time.
While visiting Seoul, highlights included going to Gyeongbokgung Palace, Namsan Seoul Tower, Jogyesa Temple and Hongdae. As one of the biggest cities in the world, I barely scratched the surface of things to do in Seoul.
Spending extended time in Busan was my favorite part about the trip with top highlights including a Korean temple stay, fresh fish markets and a Korean baseball game. It was from Busan that we ended up taking a day-trip to Daegu where we enjoyed a traditional Korean market and tried Galbi-Jjim for the first time.
If you want to see more videos from Korea in the future, let us know in the comments what places you'd like us to travel to and what food experiences you'd like to see on this travel channel.
Have you traveled to South Korea before? What was your experience like? Please share your Korea travel tips, advice and experiences in the comments below.
Thanks again for watching our Korea travel and food series! Until next time!
* * *
If you're new to our channel or this Korea series please check out the following playlists to get caught up on all of our videos:
All of our Korea travel + food videos:
***
This is part of our Travel in South Korea video series showcasing Korean food, Korean culture and Korean cuisine.
* * *
Music We Use: 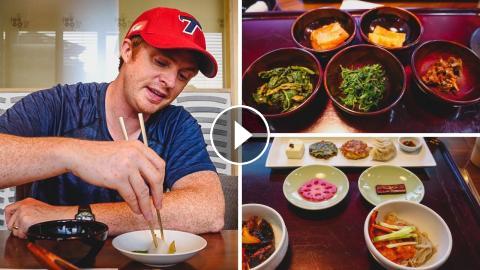 Come join us for a 3 Course Buddhist Meal in Seoul, Korea as we try eating Korean Vegetarian Food for the first time on this trip. Normally, we eat Ko...