In the land of the Maharajahs Vacation Travel Video Guide

ava
Documentary about the land of the Maharajas; Rajasthan in India.
Like an open gateway into a fascinating world the city of Jaipur leads into the historic and legendary ‘Land of the Maharajahs’, Rajasthan. Although the city has a golden past it has adjusted well to contemporary times and has been spared the bloodshed and military struggles that have been encountered in most other cities in Rajasthan, thus the old part of town has remained almost completely unchanged since it was built in 1727. The water palace of Jal Mahal on Lake Mansagar just outside Jaipur dates back to the 18th century and was used by the maharajas as a hunting residence. Surrounded by a magnificent garden according to Mughal design the Jai Mahal Palace Hotel has the unique atmosphere of an historic residence. Built in 1745 it was the residence of the former prime minister of Jaipur and today enchants visitors from all over the world with its nostalgic charm and unique atmosphere. Located around forty kilometres northwest of Jaipur is one of the most remote and captivating buildings in Rajasthan, the Samode Palace. In 1987 the palace was transformed into a splendid hotel and each year since then it has been voted as the finest and most luxurious hotel in India. Like most other cities in Shekhavati, Mandawa was originally a small village but, due to the construction of a fortress and a city wall, in 1765 the town developed into an important commercial settlement. Today Mandawa is well known for its medieval atmosphere and exceptionally well preserved buildings and is thus one of the most popular tourist destinations in the region. Due to its large number of historic and captivating buildings, Udaipur, often referred to as The Venice Of The East, has become one of the most popular tourist destinations in Rajasthan. Although the golden age of the Rajputs and princes of Rajasthan are no more their legendary lifestyle lives on in age-old stories, huge fortresses and magnificent palaces such as the remarkable Jag Niwas on Lake Pichola.

Thanks for all your support, rating the video and leaving a comment is always appreciated!
Please: respect each other in the comments.

Expoza Travel is taking you on a journey to the earth's most beautiful and fascinating places. Get inspiration and essentials with our travel guide videos and documentaries for your next trip, holiday, vacation or simply enjoy and get tips about all the beauty in the world...

It is yours to discover!

In the land of the Maharajahs Vacation Travel Video Guide 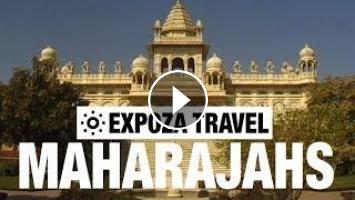 Documentary about the land of the Maharajas; Rajasthan in India. Like an open gateway into a fascinating world the city of Jaipur leads into the histo...