lily
Just for our last day in India as we leave from India to Canada from Kolkata to Toronto via Mumbai and London with British Airways in this travel vlog. Having been on the road for 9 consecutive months we decided to end our travels in Asia a bit early (originally we had allotted time for travel in Japan, Vietnam, China, Indonesia and the Philippines) after feeling a little worn out and homesick. Audrey's parents got a new pet (a German Shepherd puppy) recently and we excited to meet him (Togo). This was one heck of a marathon trip as we connected through four major cities with plenty of waiting time in between each connecting flight. You'll notice we were absolute pigs in this video eating every chance we got and probably consuming double or triple the amount of calories we'd normally have in a similar time period. LOL, what can I say other than food kept us partially sane during for such a long trip.
GEAR WE USE
Olympus OM-D E-M5 II:
Canon G7X:
Olympus 14-150mm II Lens:
Rode Video Mic GO:
Joby Gorilla Pod:
SanDisk 16GB Extreme Pro:
SOCIAL MEDIA & TRAVEL BLOGS
AUDREY:
blog:
instagram:
facebook:
twitter:
SAMUEL:
blog:
facebook:
twitter:
instagram:
India to Canada flying with British Airways travel vlog (Kolkata - Mumbai - London - Toronto) travel video transcript:
Well I think you can guess where we are. Back at the airport. Back at the airport. So yeah, this is it for us in India. We have got a lot flights ahead of us. Why don't you tell us about those.
Well okay. Haha.
So initially we were thinking of traveling around Asia a little bit longer. Yeah. But honestly it has been like seven or eight months. No, it has been longer. It has been closer to nine I think. Yeah.
Anyways, it has been a long time and we're feeling a little bit tired. We're missing family, we also want to visit our pets. So we're heading back to Canada. Yeah, and there is a new addition to Audrey's family.
Yeah, so we have a German Shepherd. It is kind of sad but my two cats and my dog past away in the last year. In the last few months. Yeah.
So we'll be meeting my German Shepard Togo. My pup brother. Togo. I already call him Wolfie. He looks like a little wolf. Yeah, he is really cute. We can't wait to meet him for the 1st time.
So first things first we're at the Food Boulevard inside the airport and we're going to go get some food because we didn't have a very big breakfast. And I'm hungry and Sam is hungry and the food looks good here.
Sam was kind enough to go get me food and I'm having some stir-fried noodles with vegetables. What you got looks really good as well.
I know. What did you get?
Haha.
Sneak peak over here. I got cheese dosa and one of my favorite Indian desserts - Jalebi.
So and that is not all. You went to another little stand for Momos.
Status update. We're going to our gate and we should be boarding in an hour and then we'll be in Mumbai.
So I don't even remember when I was last in India. It was probably like six, seven or eight years ago but I do remember that Mumbai Airport did not look like this. Like it is swanky. They've redecorated and renovated and it is really pretty.
Heading over to the T Dot. Last leg. Final. Three of three. Almost there.
Oh my goodness we are here. We are out. We arrived in Toronto probably like two hours ago bu we had to sit on the plane because someone was sick and paramedics had to come on and then the immigration line was really long. We're here. There is Sam. My sister picked me up. We're on our way home and we're going to meet my dog. Well not my dog. My Dad's dog. My family dog. Ahh. Togo. Anyways it has been a very long video. Three flights over the course of like two days. So we're going to say goodbye. Goodbye everyone. Now it is time to meet Wolfie. Wolfie that is my name. Hahaha. That is not his name. It is Togo. Haha bye.
Say hi Togo. Hello to the world. I'm a cute puppy. Look this way Togo. Hi. Hello. I'm a cute puppy.
Togo. Togo are you being camera shy all of a sudden. Venica. Togo. Oh Togo.
This is part of our Travel in India video series showcasing Indian food, Indian culture and Indian cuisine.
Music in this video courtesy of Kevin MacLeod (incompetech.com)
Licensed under Creative Commons: By Attribution 3.0 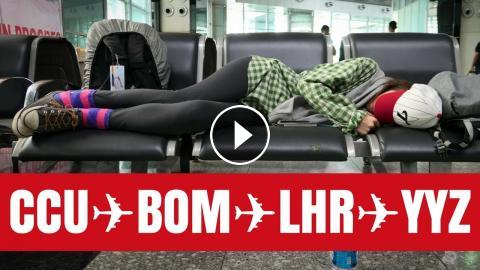 Just for our last day in India as we leave from India to Canada from Kolkata to Toronto via Mumbai and London with British Airways in this travel vlog...