ava
Quito, the capital of Ecuador, sits high in the Andes and straddles the equator, making it the closest national capital to the sun.

San Francisco de Quito, as this harmonious city is officially called, is all about balance. Its World Heritage protected Old Town is contrasted by its progressive New Town.

The New Town, or La Mariscal, is centered on the bustling Plaza del Quinde and has markets, trendy cafés and nightlife.

The Plaza de la Independencia is the Civic heart of Old Town, is overlooked by the Municipal Palace, Archbishop’s Palace and Presidential Palace.

Quito has a wealth of ornate churches, including the Santo Domingo Church, the Metropolitan Cathedral, the Basilica de la Merced, de San Francisco Church, the Church of the Society of Jesus and the Basilica of the National Vow.

There are two hills that are worth exploring: Panecillo Hill is famous for its winged statue known as the “Virgin of Quito.” Itchimbia Park has a contemporary
Cultural Center and panoramic city views.

The nearby Pichincha Volcano was once the setting of a historic battle that resulted in Quito’s liberation from Spain. But it’s the Cotopaxi Volcano, that is the Quito’s most famous landmark.While in the area, you can’t miss the Mitad del Mundo Monument and the Intiñan Solar Museum where you walk the line of the equator and be in two hemispheres at the same time. 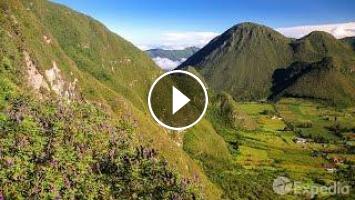 Quito, the capital of Ecuador, sits high in the Andes and straddles the equator, making it the closest national capital to the sun. San Francisco de Q...