Riding the Train at END of the WORLD ???????? | Iconic RAILWAY JOURNEY in Ushuaia, Argentina

ava
Let's ride the train at the end of the world! Head to https://squarespace.com/samuelandaudrey to save 10% off your first purchase of a website or domain.

The Southern Fuegian Railway, better known as the Train to the End of the World, is a steam railway located in Argentina’s Tierra del Fuego province.

“Why would you need a train at the end of the world?” you ask. Well, Ushuaia was initially developed as a penal colony for repeat offenders with the first prisoners arriving in 1884. The prisoners were put to work building their own prison, which meant transporting rock and timber from the nearby forests to the town, first using oxen-pulled wagons, and eventually this narrow gauge railway. Back then, this was known as the Train of Prisoners, and the prisoners had to complete the journey twice a day to and from the logging camps.

Today, the Train at the End of the World has been developed into a heritage train and it is considered the southernmost functioning railway in the world. This historic train journey is a must-do activity for anyone visiting Ushuaia - especially if you’re a train enthusiast!

The train journey begins at the End of the World Station, which is located 8 kilometres west of the city of Ushuaia, Argentina. It then travels along the Pico Valley in the Toro Gorge, making a stop at Macarena Station, where passengers have the opportunity to visit a waterfall and climb up to a viewing deck for panoramic views of the area.

The End of the World Train then continues its journey into Tierra del Fuego National Park. This is where passengers have the option of disembarking and spending the day hiking in the park, or completing the return journey. (Keep in mind that if you do get off at the park, you need to make your own way back into town - either by shuttle, taxi or hitchhiking.)

There are a handful of iconic railways in Patagonia including the Old Patagonian Express (of Paul Theroux fame) and the Tren Patagónico (which crosses from the Andes to the Atlantic), and this is another unique train journey to add to the list!

Have you travelled aboard the train at the end of the world?!

Riding the Train at END of the WORLD ???????? | Iconic RAILWAY JOURNEY in Ushuaia, Argentina 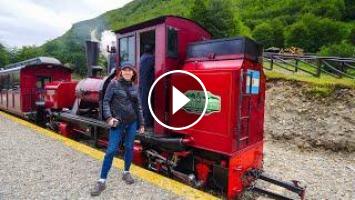 Let's ride the train at the end of the world! Head to https://squarespace.com/samuelandaudrey to save 10% off your first purchase of a website or doma...