ava
Robert “Don Pooh” Cummins has enjoyed success from music to food. He’s done it all by having a keen eye for talent and a willingness to keep trying. Watch this interview with the Brooklyn Chop House owner about working in the music industry, opening franchises, and creating avenues for black entrepreneurs.

Robert Cummins is a Restaurant Influencer —

As a veteran music industry titan, working with the likes of Mary J. Blige, Jay-Z, Nas, and Diddy, Robert “Don Pooh” Cummins' life and success has provided him with a bevy of experience and a litany of cool stories. One story involves The Notorious B.I.G adding the “Don” to Robert’s childhood nickname to create the moniker he still uses today.

His nickname is fun, but Robert Cummins is no joke in entrepreneurship. While still in the music industry, Don Pooh had the foresight to diversify his portfolio as music was rapidly changing from the days of physical copies and anticipated releases.

“You know, it's entertainment and food and restaurants and hospitality. They're all pretty much synonymous,” says Cummins about his logic for diving into the food industry on the Restaurant Influencers podcast hosted by Shawn Walchef (@shawnpwalchef) of https://calibbq.media.

It turned out to be the right move.

One of his first deals as a franchisee gave Cummins the opportunity to develop 16 Papa John stores in New York City. From there, he successfully opened two Checker’s franchises in NYC. With his proven track record, Cummins embarked on an ambitious endeavor to make IHOP a community staple in Brooklyn.

Brooklyn Chophouse is frequented by the likes of Jamie Foxx, Cardi B and Offset, and many more music and entertainment’s elite. In fact, Brooklyn Dumpling House, an automat offshoot of Brooklyn Chophouse, is partnering with one of its most famous patrons, Patti LaBelle, to bring their incredible delicacies to the freezer aisle of Wal-Mart.

Don Pooh is positioned to bolster his personal win column while teaching others to do the same with his upcoming memoir called, “How I Hop”.

NOMINATE A RESTAURANT INFLUENCER — Do you know someone or a restaurant who is great on social media? Let us know by emailing [email protected]

ABOUT ROBERT “DON POOH” CUMMINGS (@donpoohmusic):
Robert "Don Pooh" Cummins is a major player in the music industry, a staple in the franchise food and beverage industry, and the acclaimed restaurateur and owner of Brooklyn Chop House in NYC. As head of both Don Pooh Management and DP Music Group, the Brooklyn native of Barbadian descent has had a hand in and guided the careers of some of the most successful and celebrated names in Hip Hop and R&B.
• Robert ‘Don Pooh’ Cummins on LinkedIn: https://www.linkedin.com/in/robert-pooh-cummins-76146479

ABOUT RESTAURANT INFLUENCERS:
Welcome to the Restaurant Influencers podcast series. Every week host and restaurant owner Shawn P. Walchef (@shawnpwalchef) talks with leaders in restaurant and hospitality about their secrets to Smartphone Storytelling and how to show up and engage where customers are spending time online. https://restaurantinfluencers.media

Restaurant Influencers is brought to you by Toast, the powerful restaurant point of sale and management system that helps restaurants improve operations, increase sales and create a better guest experience. Toast — Powering Successful Restaurants. Learn more about Toast at https://bit.ly/3vpeVsc

Not answering the phone is one of the quickest ways for your restaurant to lose a potential customer. That’s why your restaurant needs Popmenu Answering. SAVE $100: Use our special link to get $100 off your first month. https://popmenu.com/influencers 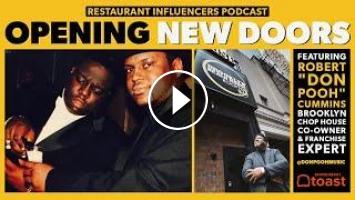 Robert “Don Pooh” Cummins has enjoyed success from music to food. He’s done it all by having a keen eye for talent and a willingness to keep trying. W...