lily
✎ Check out this sped up version of Steve Jobs' Top 10 Rules for Success video! :)
❤ HELP TRANSLATE THIS VIDEO ❤
If you loved this video, help people in other countries enjoy it too by making captions for it. Spread the love and impact.
★ MORE RECOMMENDED VIDEOS FOR YOU ★
If you enjoyed this video, you may enjoy these other videos from Evan Carmichael:
• Steve Wozniak's Top 10 Rules for Success -
• Bill Gates's Top 10 Rules For Success -
• Tim Cook's Top 10 Rules For Success -
✎ He was adopted at birth in San Francisco, and raised in the San Francisco Bay Area during the 1960s. He briefly attended Reed College before dropping out and deciding to travel through India to seek enlightenment and study Zen Buddhism. He co-founded Apple in 1976 to sell Wozniak's Apple I personal computer. The duo gained fame and wealth a year later for the Apple II, one of the first highly successful mass-produced personal computers. After leaving Apple, Jobs took a few of its members with him to found NeXT. In 1997, Apple acquired and merged NeXT, allowing Jobs to become CEO once again, reviving the company at the verge of bankruptcy. He worked closely with designer Jonathan Ive to develop a line of products that would have larger cultural ramifications. Jobs helped to initiate the development of the visual effects industry when he funded the spinout of the computer graphics division of Lucasfilm in 1986. Pixar would eventually produce the first fully computer-animated film, Toy Story—an event made possible in part because of Jobs's financial support. He was diagnosed with a pancreatic neuroendocrine tumor, and died on October 5, 2011.
♛ BUY MY BOOK, CHANGE YOUR LIFE ♛
Some used the ideas in this book to build multi-billion-dollar businesses. I'll give you the simple-yet-powerful formula that they used (and you can) to realize your dreams. Get yours.
✉ JOIN MY #BELIEVE NEWSLETTER ✉
This is the best way to have entrepreneur gold delivered to your inbox, and to be inspired, encouraged and supported in your business. Join #BelieveNation and feel the love.
⚑ SUBSCRIBE TO MY CHANNEL ⚑
If you want to do great things you need to have a great environment. Create one by subbing and watching daily.
¿ COMMON QUESTIONS ¿
• What is #BTA?:
• How do I get one of Evan's t-shirts?:
• Why does Evan look like Nicolas Cage?:
• Why does Evan make so many videos?
• How do I vote for the next Top 10 video Evan should make?
ツ CONNECT WITH ME ツ
Leave a comment on this video and it'll get a response. Or you can connect with me on different social platforms too:
• Twitter:
• Facebook:
• Google+:
• Website:
• Twitch:
• Livestream Channel:
• #BelieveNation Forums:
.: MORE ABOUT ME PERSONALLY :.
• About:
• Coaching:
• Speaking:
-----------------------------------------------------------------------------
Thank you for watching - I really appreciate it :)
Cheers,
Evan
#Believe 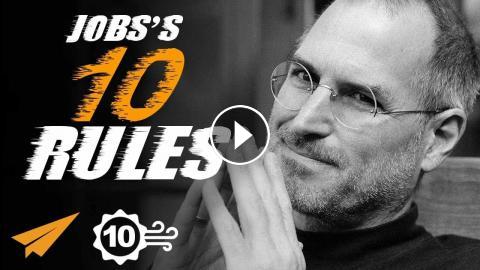 ✎ Check out this sped up version of Steve Jobs' Top 10 Rules for Success video! :)❤ HELP TRANSLATE THIS VIDEO ❤If you loved this video, help people in...