97 Views
admin
One hundred years after his birth, the prolific work of Roman architect Bruno Zevi continues to engage current problems in theory and criticism, and deserves to be revisited. From the publication of Towards an Organic Architecture, in 1945, to his monograph on Erik Gunnar Asplund published the very year of his death in 2000, many of his books have had an electrifying effect on architects and historians. Active as educator and as political activist, he was an engaged, charismatic contributor to the public discussion through his weekly chronicle in L’Espresso. Beyond Italy, Zevi has had a determining presence in Latin America and other parts of the world.
Held at a school where his passage between 1940 and 1942 was far from uneventful, this symposium addresses issues relative to Zevi’s life, to his writings and to his brave fights for his ideas. His position in Italian politics and in the historical interpretation of architecture will be questioned, as well as the theoretical, narrative and rhetorical strategies at work in his engaged texts.
The first session, entitled “Democracy, Dialogue, Narrative: The Dialectics of Disegno and Storia“, will be moderated by K. Michael Hays with contributions from Pippo Ciorra and Daria Ricchi.
The second session, entitled “Zevi's World, from Cambridge to the Rio de la Plata, and Back to Rome”, will be moderated by Anthony Vidler with contributions from Alicia Imperiale, Jorge Francisco Liernur, and Tamar Zinguer.
A conclusive lecture from Jean-Louis Cohen will measure Zevi’s role within the double perspective of architectural practice and historical reflection. 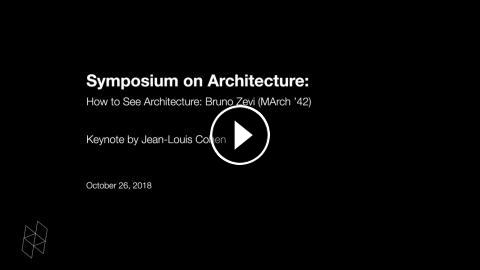 One hundred years after his birth, the prolific work of Roman architect Bruno Zevi continues to engage current problems in theory and criticism, and d...