For centuries Warsaw has been a center of refinement and knowledge. Its strategic position has also made it one of the most invaded countries in Europe.

Shaped by history’s defining events, World War Two, and the closing of the Iron Curtain, Warsaw is a survivor, and has risen from the ashes of war and the shackles of Communism.

Its true heart is its Old Town, the site of the Warsaw Uprising, one of the most heroic resistance actions ever seen against the nazis. After the war much of it, such as the opulent Royal Castle, was painstakingly rebuilt.

One of the few statues not destroyed by the German army, is the mermaid Syrena, the symbol and protector of Warsaw.

The Warsaw Museum, is the keeping place of the city’s dramatic stories.

Warsaw University served as military barracks while education was mostly outlawed, but an underground “secret university” of more than 3000 students emerged.

The POLIN Museum of the History of Polish Jews was once the infamous Warsaw ghetto, where over 400,000 were incarcerated in just less than one and a half square miles. Nearby, the Warsaw Uprising Monument and the Warsaw Rising Museum pay tribute to one of the bravest chapters of the city’s history.

Visit the Palace of Culture and Science, a gift to the Polish people from Stalin.

Stroll along the Royal Route, a path once used by Polish Kings, today a popular tourist walk, studded with historical sites.

Along Nowy Swiat Street, pass the monument to Polish astronomer, Nicolaus Copernicus. Closer to the river is the Copernicus Science Centre.

See the heart of another of Warsaw’s famous sons, Fryderyk Chopin in the Holy Cross Church. His music floats through Lazienki Park, home to Lazienki Palace.

The last stop on the Royal Route is Wilanow Palace, with luxurious artworks and formal gardens.

Since the fall of the Iron Curtain, Poland’s economy has boomed, reflected in the luxury malls, such as Zlote Tarasy and the VITKAC Department store.

Visit Praga to discover venues like the Soho Factory. An ammunition factory now home to a range of stylish shops and the Neon Museum.

These reclaimed urban areas are perhaps the perfect reflection of Warsaw today. 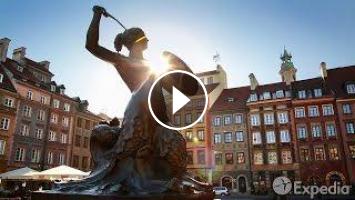 https://www.expedia.com/Warsaw.d178317.Destination-Travel-Guides For centuries Warsaw has been a center of refinement and knowledge. Its strategic pos...