ava
United Nations - Afghanistan and the United Nations have a longstanding partnership which goes back to 1946, when the country became a member of the world body. The UN’s work on the ground there dates back to 1949 when the first UN agency began operations here.
Decades later, after the fall of the Taliban and with the establishment of an interim government, the Security Council in 2002 established a political mission – known as the UN Assistance Mission in Afghanistan (UNAMA) – which continues to work to support the government and people of Afghanistan, in line with the world body’s long-term approach of helping Afghans lay the foundations for sustainable peace and development.
The Secretary-General’s Special Representative for Afghanistan and head of UNAMA, Tadamichi Yamamoto, spoke with the UN News Centre in the lead-up to the Brussels Conference on Afghanistan (4-5 October) about the world body’s work in the central Asian nation and the challenges it faces on its path to peace and stability. In his comments, the Special Representative describes the international community’s support for and commitment to the country as essential for its future progress. 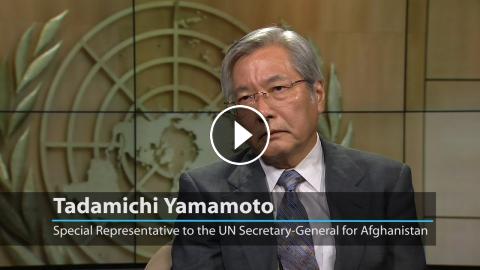 United Nations - Afghanistan and the United Nations have a longstanding partnership which goes back to 1946, when the country became a member of the w...