The Northern Ireland Protocol forms part of the Withdrawal Agreement between the United Kingdom and the European Union. The Protocol creates a special legal position for Northern Ireland in the light of its particular political circumstances, effectively enabling Northern Ireland to remain within the EU’s Single Market for goods. The UK Government argues that it is necessary to ‘fix’ certain practical problems that it perceives in relation to this arrangement, including ‘disruption and diversion of trade and significant costs and bureaucracy for business’. It therefore proposes the enactment of the Northern Ireland Protocol Bill.

In this video, Professor Mark Elliott considers the extent to which the Bill could be considered to be proposing a breach of international law.

Mark Elliott is Professor of Public Law and Chair of the Faculty of Law at the University of Cambridge, and a Fellow of St Catharine's College, Cambridge. From 2015 to 2019, he served as Legal Adviser to the House of Lords Select Committee on the Constitution, providing advice to the Committee on a range of legislative and other matters. Mark co-founded the international biennial Public Law Conference series and co-convened the first two conferences. He is the recipient of a University of Cambridge Pilkington Prize for excellence in teaching and is the author of a widely read blog http://publiclawforeveryone.com/ that is aimed at public law scholars, current and prospective law students, policy-makers, and others who are interested in the subject.

For more information about Professor Elliott, you can also refer to his profile at https://www.law.cam.ac.uk/people/academic/mc-elliott/25

Law in Focus is a collection of short videos created by Daniel Bates featuring academics from the University of Cambridge Faculty of Law, addressing legal issues in current affairs and the news. These issues are examples of the many which challenge researchers and students studying undergraduate and postgraduate law at the Faculty. 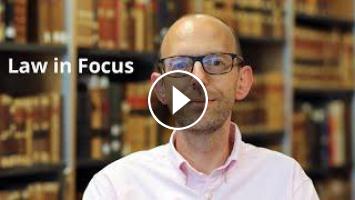