79 Views
admin
On Pocketnow Daily, new patents show us that we might get an iPhone with both Touch ID and Face ID in the future. Renders of the Nokia 9 PureView suggest that the company is ditching the notch and that Android One is coming to this phone after all. A new report tells us the specs of the selfie cameras of the Galaxy S10 and S10 Plus. LG just teased out that they will bring a Time of Flight sensor in the selfie camera of the LG G8 ThinQ. We end today's show with Motorola announcing their brand new mid-range Moto G7 line.
All this and more after the break.
Stories:
- Samsung Galaxy S10 selfie camera detailed by report
- Apple patents its own sonic-imaging Touch ID method
- New Nokia 9 PureView render ditches the notch
- LG G8 ThinQ confirmed to feature a Time of Flight selfie camera
- Moto G7 hands-on: Budget phones that “Play” with “Power”
#PocketnowDaily #GalaxyS10 #iPhoneXI
Subscribe:
Follow us:
Graphics provided by: Motionvfx.com
About us:
Pocketnow has been a key source of mobile technology news and reviews since its establishment in 2000. With offices on three continents, Pocketnow offers round-the-clock coverage of the mobile technology landscape, from smartphones to tablets to wearables. We aim to be your number-one source for mobile tech news, reviews, comparisons, and commentary. If you love mobile as much as we do, be sure to subscribe!
[Video Title]
[Video URL]
Pocketnow 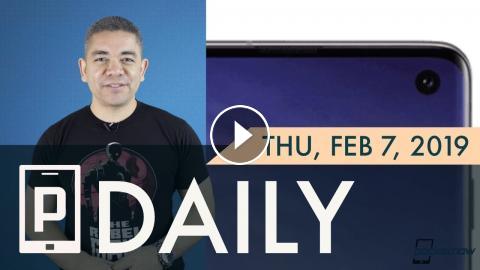 On Pocketnow Daily, new patents show us that we might get an iPhone with both Touch ID and Face ID in the future. Renders of the Nokia 9 PureView sugg...