60 Views
admin
On Pocketnow Daily, Google just announced their new Stadia gaming platform. The Black Shark 2 gaming phone was announced yesterday with great features. Apple just released a new iPad Air and a refresh to the iPad Mini. Qualcomm also announced their QCS400 chipset for smart speakers. We end today's show with Samsung's press invitations for their streaming event on April 10th.
All this and more after the break.
Stories:
- Google Stadia revealed as a game streaming service for all platforms – TVs and phones included
- Xiaomi Black Shark 2 announced with 12GB of RAM
- iPad Air debuts, iPad mini gets new version starting from $399
- iMac updated with more Intel cores for 4K, 5K versions
- Qualcomm’s more power-efficient chip for smart speakers debuts
- Samsung schedules a Galaxy Event for April 10
#PocketnowDaily #Stadia #iPadAir
Subscribe:
Follow us:
Graphics provided by: Motionvfx.com
About us:
Pocketnow has been a key source of mobile technology news and reviews since its establishment in 2000. With offices on three continents, Pocketnow offers round-the-clock coverage of the mobile technology landscape, from smartphones to tablets to wearables. We aim to be your number-one source for mobile tech news, reviews, comparisons, and commentary. If you love mobile as much as we do, be sure to subscribe!
[Video Title]
[Video URL]
Pocketnow 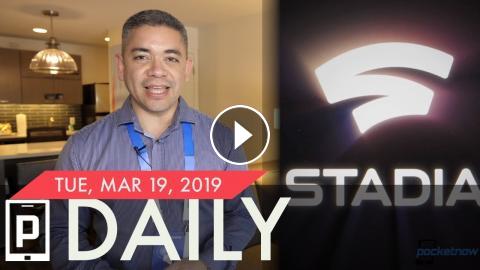