Google finally made me LOVE the Pixel 4 XL

ava
There is this simplistic way in which Google does hardware. Many of us criticize its sluggish adoption of the times, but the more of its products that I use, the more I realize Google doesn't care. They're not about the curves you can't manipulate with one hand, or the slippery glass that keeps sliding off your table. To Google, it's as if the dazzling elegance of competing products is pointless if it doesn't serve a higher purpose… which is, in my opinion, to make their hardware more like a cohesive extension of the software.

So why has Google failed? If the marketing is there, and the carrier deals as well, then why has their intent to delight not gained popularity?

I think the answer lies in the oxymoron "Cringeworthy-Delight, which became HTC's approach to the grave: Make an ugly phone with an amazing camera plus lens flares with the Pixel 1, Make a pretty phone with a terrible screen with the Pixel 2, tarnish the otherwise great canvas of the Pixel 3 XL with the worse notch in History.. Like.. It's as if Google always figured out a way to make us cringe in its intent to delight. You could even assume the hardware team and the software team just don't talk to each other.

With such a tarnished reputation, How much could anyone forgive the Pixel 4's added layers of controversy? It almost feels like this phone is necessary evil, cause the only reason why I've decided to use it again for the past month is precisely because of the two other things it gets right, Android 11 being one of them. I'm Jaime Rivera with Pocketnow and this is the Google Pixel 4 XL eight months later, and my experience with Android 11 beta after a week of use.

Google finally made me LOVE the Pixel 4 XL 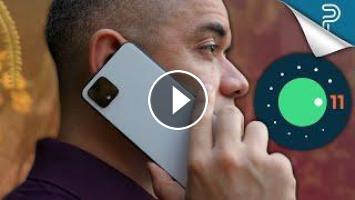 There is this simplistic way in which Google does hardware. Many of us criticize its sluggish adoption of the times, but the more of its products that...