How to speak in English about the future? Advanced English Speaking practice lesson

ava
How to speak in English about the future? Advanced English Speaking practice lesson

Hey subscribers, welcome to another English speaking lesson for Let’s Talk Academy. In today’s English lesson you would learn how to talk about the future in English – Immediate, near or the far future. Often while speaking English we come across such situation where we have to discuss the future in general. Learn some useful 9 English phrases that would help you to speak fluently and confidently in English.

It will/won’t happen in our life time

Used to talk about something that may or may not happen in 50-60 years
Example: Wiping away corruption won’t happen in our life time

It will take forever/ an eternity
Used when you are annoyed because you feel that what you want will never happen or won’t happen soon enough
Example: I won’t stand in the queue, it will take forever. I’ll just buy online tickets.

It could happen anytime now/minute/day now.

Used when an event is definitely going to happen very soon, but you are not sure of when exactly that is
Example: Tidy up your room, mom could arrive any minute now.

Used when an event is definitely going to happen very soon and you are sure of when exactly that is
Example: My parents’ anniversary is just around the corner, I need to think of something nice to give them as a gift.

It’s a sign/taste of things to come

Used when something that has happened indicates how things in the future will be
Example: Our country is investing a lot in education. It is a sign of things to come. (Meaning you expect development, literacy, more job opportunities in the future)

I’m counting the days until….

Used when you are excitedly or anxiously awaiting an event
Example: I’m counting the days until my father comes back from war.

Sooner or later
Used when something is bound to happen either soon or far in the future
Example: Sooner or later online fraudsters will be caught

Used when you are not certain about the future outcome but things will eventually become clear.
Example: Time will tell whether our newly elected president was the nation’s best decision or not

How to speak in English about the future? Advanced English Speaking practice lesson 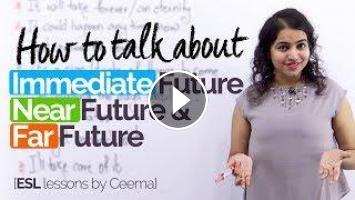 How to speak in English about the future? Advanced English Speaking practice lesson http://www.learnex.in/english-speaking-practice-lesson-talking-abo...