ava
United Nations - Video message by United Nations Secretary-General António Guterres on the occasion of the International Day to End Impunity for Crimes against Journalists (2 November 2018).
In just over a decade, more than a thousand journalists have been killed while carrying out their indispensable work. Nine out of ten cases are unresolved, with no one held accountable.
Female journalists are often at greater risk of being targeted not only for their reporting but also because of their gender, including through the threat of sexual violence.
This year alone, at least 88 journalists have been killed.
Many thousands more have been attacked, harassed, detained or imprisoned on spurious charges, without due process.
This is outrageous. This should not become the new normal.
When journalists are targeted, societies as a whole pay a price.
I am deeply troubled by the growing number of attacks and the culture of impunity.
I call on Governments and the international community to protect journalists and create the conditions they need to do their work.
On this day, I pay tribute to journalists who do their jobs every day despite intimidation and threats. Their work – and that of their fallen colleagues -- reminds us that truth never dies. Neither must our commitment to the fundamental right to freedom of expression.
Reporting is not a crime.
Together, let us stand up for journalists, for truth and for justice.
Website: 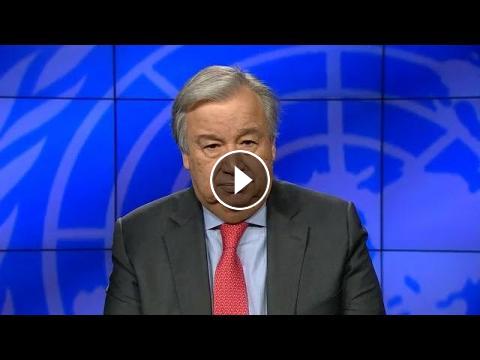 United Nations - Video message by United Nations Secretary-General António Guterres on the occasion of the International Day to End Impunity for Crime...