Learn English Vocabulary: 12 ways to use body parts as verbs

ava
In this lesson, I will teach you twelve ways that we use body parts as verbs in English. Does that sound strange? Well, maybe it is, but these are verbs you will hear pretty often, so you should learn them. We will look at expressions like "necking", "shoulder a burden", "mouth off", "to eyeball someone", "skinned alive", and more. These expressions are commonly used by native English speakers and are useful in everyday life. When you're finished watching, head over to the quiz at https://www.engvid.com/12-ways-to-use-body-parts-as-verbs/ to test yourself!

Hi. James from engVid. I was going to try to... A shoe and a book joke, but I didn't think it would go well. But Mr. E is saying to me: "I gotta hand it to you." Right? "You tried." Yeah, I did try. Unfortunately I failed. Today I want to teach you about body parts as verbs, and how certain parts of our body, from our hands to our mouths, to our heads can be used as verbs and have a meaning.

Now, before I go any further, I want to say two things. Thank you to Baz and Tomo. Thanks, guys, you made this lesson possible with some of your suggestions. And if you guys have suggestions for me at all for lessons, please, don't hesitate. Go to engVid, www.engvid.com, and just say, you know: "Can you teach this, this, and this?" or "Could you help us with...?" and you might get your name on the board.

Now, I'm going to move on to our lesson, but just to point out because you grammar heads out there will say: "He wrote 'gotta', and that's not a word in English." You're right, this is slang. But I'm saying: "You gotta hand it to me", because I'm using one of these body parts as a verb right there: "hand it", it means have got to. "I have got to hand it to you." But in English, we say: "gotta" because it's faster and simpler. Right? So: "I have got to hand it to you" is very formal, "I gotta hand it to you" is very natural. Keep that in mind. If you're writing, write: "I have got to", but if you're speaking, you could say to a Canadian: "I gotta get going now", and they'll understand you have to go. Cool? All right.

Moving on. First things we want to talk about, and I tried to do this in order with your body so you will remember the order. "Head", I have a head. I cannot walk like this, it doesn't make sense. I turn my head in the direction I'm going. So, when somebody says: "Where are you heading?" they're saying: "I see your head is going in this direction. To where are you going?" So: "heading" means direction. "He was heading to his house", that means the direction he was going of his house. "She was heading to the store", she was going in the direction of the store. Number one: "heading".

Number two: "eyeball". "To eyeball somebody" is to look at them. Usually used in a negative sense. If someone says to you: "Are you eyeballing me?" It means: "Are you staring at me or looking at me? Because I don't like how you look at me, okay? Stop doing it." Okay? So: "to eyeball someone". Maybe you, you know... Sometimes you've seen women look at other women, and they look them up and down, like: "Look at her." They're eyeballing, because you can see their eyes moving and checking them out. Or guys eyeball each other, like: "Yeah, he thinks he's tough", and they eyeball you. Okay? Number two: "to eyeball".

Number three: "neck". I'm not a vampire, I don't... I don't want to bite you and get your blood, but "necking" isn't when two people put their necks together, but "necking" is kissing, but long-time kissing, so it's like you're with your partner: "[Kisses]". "Necking", okay? So that's why I have two lips, because they're kissing and that's why the two people are happy because messing... Messing. [Laughs] Kissing means... "Necking" means long-term kissing or long-time kissing and passionate kissing. Okay?

Number four: "mouth off". You can see the mouth is jumping off of a box. Let me finish that box, it doesn't look like a full box, there. So it's jumping off a box. "Mouth off" is to say things, like: "Get out of here. I don't care." It's being rude. Being rude, maybe sometimes using slang towards someone. So, for example, if your dad were to say: "Hey, could you pick up the box?" And you go: "Yo, old man, why don't you pick up the box? You're bigger than me, you should pick up..." You're mouthing off. I would say: "Stop mouthing off. Stop being rude." Okay? Or: "...talking back to me like that". "Mouthing off".

"Shoulder", "shoulder a burden", that's just one example, but when you shoulder something, like a responsibility, it means you carry it with you. You carry it with you. So if you're shouldering many responsibilities, maybe you are a student, maybe you're trying to learn English, maybe you have a job, maybe you have a fam-... That's a lot of things to put on your shoulders. Because shoulders are used to carry, so you're carrying a lot of these things on your shoulder. Okay? […]

Learn English Vocabulary: 12 ways to use body parts as verbs 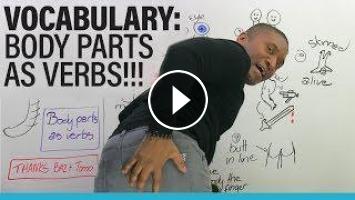 In this lesson, I will teach you twelve ways that we use body parts as verbs in English. Does that sound strange? Well, maybe it is, but these are ver...