Lily
Learn the letter S. This Alphabet song in our Let’s Learn About the Alphabet Series is all about the consonant s

Your children will be engaged in singing, listening and following along as they’ll learn to: identify the alphabet letter, form the upper and lower case letter, say the letter sound clearly and accurately. They will see, hear and say the consonant letter as a beginning and ending sound with a variety of storytelling words.
This letter song also includes a catchy chorus that will motivate your children to want to learn about the alphabet, and at the end, an inspirational reading rap.
All of the alphabet songs in this series have a great beat, lots of repetition and curriculum based reading and language arts content that meets state, national and common core standards. All of the letters that we use and the way we form the letters follow the Zaner-Bloser Handwriting Manuscript.
Your children will want to sing this catchy, cool, reading skill song over and over. They will hear the consonant sound at the beginning and at the end of each word.

Listening to this engaging, reading, skill-building alphabet song and following all the printed words and entertaining visuals, your children will develop their phonological awareness, phonics and language arts skills.
The very helpful educational feature of each song is a close-up of Jack saying each letter sound clearly. Your children will be able to see how Jack forms his mouth to say the sound correctly. Children can model these mouth positions so they can say the letter sounds correctly, too. We hope your children both enjoy and learn from each one of the alphabet songs in our Let’s Learn About the Alphabet Series. Sing and watch them over and over again.
And, as an extension activity, see if you and your children can think of new words and stories for each letter. We found searching for words for each letter to be very challenging and really a lot of fun.

Get ready, get set, Let’s Learn About the Alphabet


At the beginning of these words
Listen for the s sound /s/
Down by the sea, sea, sea
Under the sun, sun, sun
There was a seal, seal, seal
Then there were seven, seven, seven

At the end of these words
Listen for the s sound /s/
Two happy clowns, clowns, clowns
Wore silly hats, hats, hats
On a crazy bus, bus, bus
With balloons, balloons, balloons
It’s fun to learn about the alphabet
And I’m really gonna’ try and do my best
Learn each letter, learn each sound
Learn how to write each letter down
I feel so good deep inside
I’m proud I’m learning, to read and write 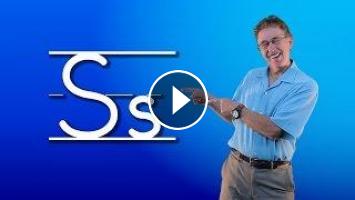 Learn the letter S. This Alphabet song in our Let’s Learn About the Alphabet Series is all about the consonant s Your children will be engaged in sing...