217 Views
admin
[Full description below] This comparison was brought to you by Squarespace and its new version 7 drag-and-drop UI. Squarespace is the all-in-one solution that makes it fast and easy to create a beautiful website, blog, or online store for you and your ideas. Visit for your free trial and up to 10% off; you’ll be getting a good deal and showing your support for Pocketnow as well. Squarespace: start here, go anywhere.
Each year, Samsung releases two smartphones separated by roughly six months: one a mainstream flagship, the other an overpowered phablet. These are the Galaxy S and Galaxy Note, respectively, and though they target materially different types of consumer, we nonetheless directly compare them every single year. That's because there's a significant amount of bleedover interest when you get to this level of features and cost: people who don't really like large phones may nonetheless consider the Note 4 for its added features, just as those who really don't like compromise may find themselves drawn to the smaller Galaxy S6 for its reduced footprint. (And to those who say that it's somehow unfair to compare the two due to the six-month release pacing –that we should really be comparing the S6 with the forthcoming Galaxy Note 5– not to worry: we'll get to that eventually, just like we always do.)
This year's comparison –Galaxy S6 vs Galaxy Note 4– is a little easier thanks to amplified similarities and disparities across these latest models. While the cameras and displays on this year's handsets are quite similar in terms of resolution and day-to-day performance, there's a vast technical gulf lying between them. While a Qualcomm Snapdragon 805 processor powers our version of the Galaxy Note 4, the newer Galaxy S6 features Samsung's own Exynos 7420. That doesn't have much bearing on real-world usage (which is why we barely mention it in the comparison narration), but the expandable memory and removable battery on the Note 4 gives it a pronounced edge over the sealed-up Galaxy S6. And then, of course, there's the S Pen stylus.
But we're not here to give away the conclusion. Hop on own to the Galaxy S6 vs Galaxy Note 4 video below, and be sure to check out our full review of the Galaxy S6 and our full review of the Galaxy Note 4 at Pocketnow when you're through!
The Galaxy S6 edge footage used throughout this comparison was made possible by a device loan from dbrand, providing custom Galaxy S6 edge skins like the one seen in the videos above:
Subscribe:
About us:
Pocketnow has been a key source of mobile technology news and reviews since its establishment in 2000. With offices on three continents, Pocketnow offers round-the-clock coverage of the mobile technology landscape, from smartphones to tablets to wearables. We aim to be your number-one source for mobile tech news, reviews, comparisons, and commentary. If you love mobile as much as we do, be sure to subscribe!
Follow us:
Follow Michael: 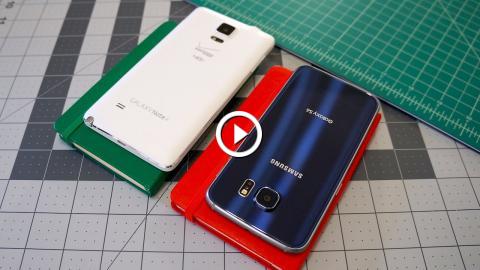 [Full description below] This comparison was brought to you by Squarespace and its new version 7 drag-and-drop UI. Squarespace is the all-in-one solut...