The Show Must Go Online

ava
It goes without saying that University campuses look and feel different this fall, but as we continue to social distance and limit the capacity of large spaces, musicians at the University of Rochester have found ways to stay connected with their audiences.

“I think we can challenge our views of what we think of as being an audience,” says Rachel Waddell, musical director and conductor in the Department of Music.

In March 2020, when COVID-19 led to the cancellation in-person classes for the rest of the semester, it was obvious that student ensembles would not be able to perform live for an audience for some time. It was disheartening for everyone—faculty, students, and audiences alike. But it was also a turning point.

“I had a choice to make,” says Waddell. “I could let the ensemble fizzle out, and say that’s that, or find some project that could bond us together, make us a community, and give a sense of finality for our graduating seniors.”

Waddell decided to adapt the traditional performance of Tchaikovsky’s 1812 Overture finale, which usually takes place in front of Rush Rhees Library to mark the final day of classes. The 15-minute composition—known for its climatic volley of cannon fire—is a staple to accompany Fourth of July fireworks. The May 2020 performance of the piece at Rochester sought to recognize the graduating Class of 2020 as well as the community members serving in the fight against COVID-19.

Waddell recruited Stephen Roessner, a senior lecturer in the Department of Audio and Music Engineering, to assist her, and the duo worked together to create a timeline and plan for the project. Waddell made tutorial screencasts to show herself using the technology, and a screencast of herself conducting with a click track. Meanwhile, the students submitted their recorded video and audio to Roessner, to be stitched together into one group performance.

Doing everything remotely, certain adaptations had to be made. For instance, the cannon sounds were actually accomplished by a series of balloons being popped, and a little audio engineering magic from Roessner—an idea conceived by the music department's manager for music performance programs, Jimmy Warlick.

“You play in an orchestra and generally you’re following the conductor, and the whole orchestra,” Roessner says. “Everyone had their own tempo, and everyone kind of had their own pitch, so there were some adjustments I had to make, to make sure everyone was playing together. And that’s to be expected, when you’re playing in an orchestra, you’re adjusting to everybody around you. You’re going to come to a come to concensus orally, you’ll hear that you’re in tune with rest of the orchestra. But if you’re playing alone with no real reference point, then you can’t hear it.”
The result was a virtual performance of 1812 Overture Finale video, which was released on the University’s YouTube channel, including Instagram and Facebook accounts, reaching more than 40,000 people.

At the Eastman School of Music, students and faculty also found ways to share their art with audiences online through a series called Eastman Connects. Performers have recorded themselves at home, and in some cases had a number of musicians in different locations compiled into virtual ensembles. These performances have been shared on Eastman's YouTube and social media channels, offering a platform both for those creating music, and those who long to hear new music.

For students like Raffi Wright '22E, it was a way to connect with the community during a time when he wasn't able to see them in person.

"I really wanted to send out to my community in Rochester and the community
that's followed me," says Wright, "that they do matter to me, and we all really do matter to each other, we need each other."

From the solo performances seated at the piano, to chamber music, to larger orchestrations by the Eastman Opera Theatre, the music hasn't stopped, even if the recital halls that are normally filled on a nightly basis, remain empty. It's a shift in mindset, but it doesn't change the role of music in the lives of those whose passion has fueled their educational path.

The Show Must Go Online 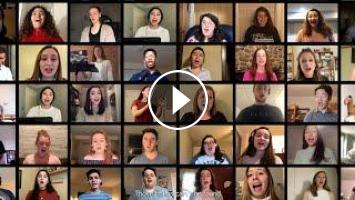 It goes without saying that University campuses look and feel different this fall, but as we continue to social distance and limit the capacity of lar...