The world's mine oyster - Shakespeare Speaks

224 Views
admin
Queen Elizabeth I loves her treasure... learn a phrase from Shakespeare that is still in use today.
For the transcript click 'SHOW MORE'.
For activities and extra materials connected to this episode: ...
Shakespeare Speaks is a co-production by BBC Learning English and The Open University.
TRANSCRIPT
Narrator
The year is 1599. William Shakespeare is at the palace of Queen Elizabeth I of England. The Queen has ordered Shakespeare to write another play.
Queen Elizabeth I
Mr Shakespeare. Tell me about my new play.
Will
Your Majesty, The Merry Wives of Windsor is a comedy, in which Sir John Falstaff tries to trick two married ladies into giving him money behind their husbands' backs.
Queen Elizabeth I
Falstaff! Hahaha! He is such a wicked man... that's why I like him. Or maybe he reminds me of our dear friend Sir Walter Raleigh, who brings me treasure from around the world. Look at my pearls, taken from a Spanish ship by Raleigh and brought to me as a gift.
Will
They are beautiful, your Majesty. Whoever could guess that such a creature, deep in the ocean, could contain the most beautiful, precious treasure: a pearl?!
Queen Elizabeth I
Yessss... to Raleigh, the whole world is an oyster... full of treasure, ready for the taking. By force if need be... he is not afraid to use the sword to bring me my treasure.
Will
Mr Raleigh is your loyal servant, your Majesty, as am I.
Queen Elizabeth I
To Falstaff. What of his trickery?
Will
Your Majesty, while Falstaff is trying to get money from the wives, his friend Pistol is trying to get money out of him!
Queen Elizabeth I
Hahaha! Does he get it?
Will
Falstaff tells Pistol he won't give him a penny. Pistol becomes angry and says he'll get his sword and open up Falstaff's money bag - or any money bag he can find - like he's opening an oyster with a knife! It goes like this. I will not lend thee a penny...
Thomas Swann as Falstaff
I will not lend thee a penny.
Robert Harley as Pistol
Why, then the world's mine oyster.
Which I with sword will open.
Queen Elizabeth I
The world's mine oyster. It's full of money and treasure. Quite right, Mr Shakespeare, quite right.
Narrator
We'll leave them there for now. The Merry Wives of Windsor was Shakespeare's only comedy to be set entirely in England, and it's considered to be his most realistic portrayal of the daily lives of ordinary people. Think of it as the original 'Real Housewives'. In Shakespeare's play, the phrase the world's mine oyster was used as a threat - but today, it has become the world's my oyster - or your oyster - and it describes situations that contain wonderful opportunities. Take US entrepreneur Chris Gardner, who wrote in his autobiography The Pursuit of Happyness:
Clip 1
The world is your oyster. It's up to you to find the pearls.
Narrator
It can describe the opportunities that open up when you take risks, have money or learn new skills.
Clip 2
If you learn foreign languages, the world's your oyster.
Queen Elizabeth I
Mr Shakespeare: I am pleased. Your actors will perform this play for me.
Will
To perform, or not to perform: I'll just do what she tells me.

The world's mine oyster - Shakespeare Speaks 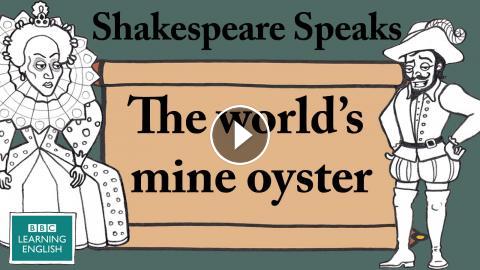 Queen Elizabeth I loves her treasure... learn a phrase from Shakespeare that is still in use today.For the transcript click 'SHOW MORE'.For activities...