lily
In this episode I show you the best beaches in Sri Lanka from the west coast over the south coast to the lesser know east coast - along the way we sample some street food and checkout the wildlife.
My Guide for Sri Lanka:
--- equipment used to produce this video ---
Cam1:Sony A7 II
Cam2: Sony NEX 5
Cam3: GoPro
Drone: Phantom 3 Pro
Drone Backpack: Manfrotto D1
Amazon Tripod
Joby Gorillapod
Audio Recorder: Zoom H2n
SDHC Memory Card
Waterproof Memory Card Case
Backpack Osprey Farpoint 40
Sri Lanka is a year-round holiday destination with two monsoon seasons and is home to some incredible beaches on both sides of the island. If you want to go to the south and west coast of Sri Lanka the best time to visit is from December to April. For the east coast the time between April and August is best.
We start our journey in Beruwala and Bentota, this very long sand beach is without any doubt one of the most beautiful beaches in Sri Lanka and only a 2h drive from the capital. The next stops are the beaches of Hikkaduwa and Unawatuna close to Galle.
Further down south you can find Mirissa, a relaxed little town which is a popular starting point for whale watching, too. Afterwards it’s time to spot some wildlife in the Yala National Park which has also a beach...but swimming is not allowed, so we’ll go for a leopard safari instead.
The east coast of Sri Lanka is still fairly unknown, therefore I decided to show you this part of the island more in-depth starting with Arugam Bay, a popular surf spot. Pasikudah is a longer drive to the north which is totally worth it - the locals even state it is the most beautiful beach in Sri Lanka!
Our last stop is Trincomalee in the north east of the country with its wide beaches of Uppuveli and Nilaveli. A short boat ride off the main land you should visit Pigeon island which has not only a beautiful beach but an incredible maritime life…so make sure to bring some snorkeling gear!
This part of the trip was executed within 2weeks by using buses, trains, cars and a domestic flight (Trincomalee-Colombo) - following I list all the places I visited & Things to do on the coast of Sri Lanka:
- Beruwala
- Bentota
- Hikkaduwa
- Unawatuna
- Mirissa
- Yala & Yala National Park
- Arugam Bay
- Batticaloa & Kattankudy
- Kumana National Park
- Kudumbigala sanctuary
- Pasikuda
- Trincomalee
- Uppuveli
- Nilaveli
- Pigeon Island
---About the Tropical Escape---
Sri Lanka is an island country in South East Asia which has maritime borders with India to the northwest and the Maldives to the southwest. After a 30 year long civil war which ended in 2009 the diverse country is now opening up more an more for tourism. The goal of this series is to give you an introduction to the country and the neighboring Maldives.
I'm excited to share all my experiences in Sri Lanka & the Maldives over the course of the next 3-4 weeks with you. In the next episodes I will take you to the south and east coast of Sri Lanka - we will go on an leopard safari, will eat the local street food and enjoy the beaches in Trincomalee as well as Arugam Bay.
The production of this series was supported by:
--- my travel equipment ---
insurance
packing list
Online Language Course
The whole trip was executed over the course of altogether 4 weeks. The Tropical Escape is a video series which sums up 2 trips to the region - one in 2014 (Sri Lanka) and the latest in 2016 (East Coast of Sri Lanka & The Maldives).
===
My personal recommendations for Hotels & Hostels:
===
Music:
www.epidemicsound.com
Follow me: 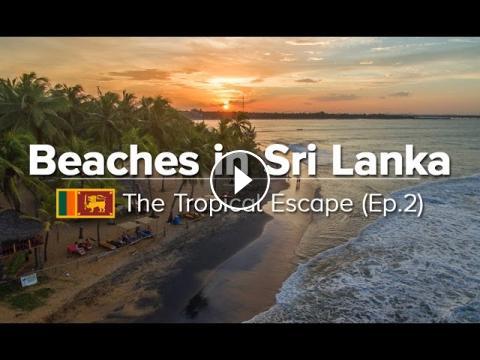 In this episode I show you the best beaches in Sri Lanka from the west coast over the south coast to the lesser know east coast - along the way we sam...