ava
Noon briefing by Stéphane Dujarric, Spokesman for the Secretary-General.
Daily Press Briefing:
- Libya
- Secretary-General's Travel
- Yemen
- Mozambique
- Sudan
LIBYA
The Secretary-General continues to follow the situation in Libya with grave concern.
His Special Representative, Ghassan Salamé, remains in Tripoli, where the UN Support Mission (UNSMIL) continues its work. Earlier today, he met with the President of the Presidency Council, Fayez Serraj, with whom he discussed ways the UN can assist at this critical and difficult juncture.
As the Secretary-General said before leaving Benghazi on Friday. the UN remains available to facilitate any political solution able to unify the Libyan institutions.
Our humanitarian colleagues report that the escalation of violence in and around Tripoli has caused the displacement of some 3,400 persons fleeing from fighting and has blocked emergency services from reaching casualties and civilians; fighting has also damaged electricity lines. Clashes with heavy weapons are affecting residential areas, and an unknown number of civilians are unable to flee these locations.
We are calling for a temporary humanitarian truce to allow for the provision of emergency services and the voluntary passage of civilians, including those wounded, from the areas of conflict.
Our humanitarian partners have stocks in place in multiple locations throughout Tripoli. These include: food stocks for an additional 80,000 people for a period of two weeks and emergency medical supplies to treat up to 210,000 individuals over the next three months; this is in addition to recent distributions of emergency medical supplies that can treat up to a million individuals, and shelter and non-food assistance for 15,000 families across Libya.
The Humanitarian Coordinator for Libya, Maria Ribeiro, reminds all parties of their legal obligations under International Humanitarian Law and International Human Rights Law to ensure the safety of all civilians and civilian infrastructure.

SECRETARY-GENERAL’S TRAVEL
The Secretary-General returned to New York following his travels last week to Tunisia, Egypt, Libya and Jordan.
On Saturday, the Secretary-General visited the Baqa’a Camp in Jordan, which is run by the UN Relief and Works Agency for Palestine Refugee, otherwise known as UNRWA. The Secretary-General said it was a very emotional moment for him to see young children learning about and discussing human rights and participating in a student parliament. He said, “To see that in 700 schools, 530,000 Palestine refugee children are learning not only about science and about mathematics or about Arabic, but also are learning about human rights, about democracy, about tolerance, making the conditions to be exemplary citizens - this is something that warms my heart,” he said.
He also called on the international community to maintain the level of financing for UNRWA this year and to make sure that the stability is guaranteed for 2020. He underscored that if the agency’s programmes are stopped, it would have a devastating impact on the region.
While in Amman, the Secretary-General also spoke at the World Economic Forum on the Middle East and North Africa and met with King Abdullah of Jordan.

YEMEN
Preliminary reports from our team in Yemen indicate that as many as eleven civilians, including five students, were killed and scores of civilians injured in Shu’aub District in Sana’a City yesterday.
Lise Grande, Humanitarian Coordinator for Yemen, said that these are terrible, senseless deaths and injuries and we offer our deep condolences to the families of the victims. She said that protecting people and protecting civilian infrastructure [are] core principles of international humanitarian law.
We tweeted yesterday evening about our concern at the deaths in Sana’a and called on all parties to exercise utmost restraint and ensure the safety of all Yemenis.
During 2018, humanitarian organizations reported an average of 45 incidents of armed violence each week in Yemen. Thousands of civilians were killed last year, including more than 950 children. 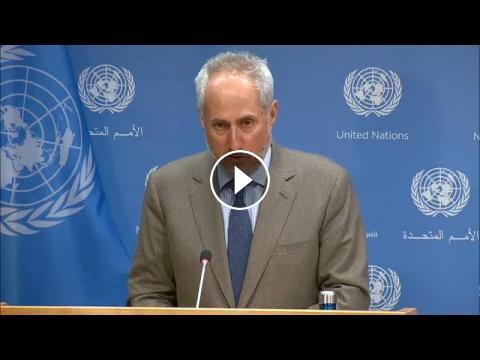