ava
Noon briefing by Farhan Haq, Deputy Spokesperson for the Secretary-General.
Daily Noon Briefing:
- Children and Armed Conflict
- Nigeria
- Syria
- Afghanistan
- World Day Against Trafficking in Persons
- International Day of Friendship
CHILDREN AND ARMED CONFLICT
The Secretary-General is disheartened at the increasing level of grave violations committed against children, as documented in the 2018 Annual Report on Children and Armed Conflict. Last year, the United Nations verified more than 24,000 grave violations committed against children, while thousands of others were pending verification due to resources and access constraints. In the reporting period, girls and boys have again borne the brunt of new and protracted crisis and endured such violations as killing and maiming, recruitment and use by armed forces and armed groups, abduction, sexual violence, attacks on schools and hospitals and the denial of humanitarian access.
The Secretary-General is particularly appalled at the number of children killed or maimed in the 20 country situations on the Children and Armed Conflict agenda last year, which has reached more than 12,000 boys and girls, an unprecedented level.
The Secretary-General urges all parties to conflict to strengthen their engagement with the United Nations and reminds them of their responsibility to protect children.  Parties must ensure compliance with their obligations under international law, including the special respect and protection accorded to children affected by armed conflict by international humanitarian law.  In the conduct of hostilities, parties to conflict must refrain from directing attacks against civilians, including children, and civilian objects. He reiterates that peace remains the best protection for children affected by armed conflict and calls on all parties and those who can influence them to work towards political agreements and solutions to resolve existing conflicts.
The Secretary-General commends the engagement of his Special Representative, her office and each country team with parties to conflict to end and prevent grave violations, resulting in tangible measures benefitting children in several contexts.

NIGERIA
You will have seen that, yesterday evening, we issued a statement in which the Secretary-General strongly condemned the recent spate of attacks against civilians in Nigeria, including the attack on 27 July in Borno State.
The Secretary-General expressed his deep condolences to the families of the victims and to the Government and people of Nigeria. He wishes a speedy recovery to the injured and hopes those responsible for these attacks will be swiftly brought to justice.
The Secretary-General called for an end to these attacks and reaffirms that such acts of violence are grave threats to the security of human beings and constitute violations of international humanitarian law.
The Secretary-General reiterated the solidarity of the United Nations with the Government and people of Nigeria in their efforts to counter terrorism and violent extremism.
SYRIA
Under-Secretary-General for Humanitarian Affairs Mark Lowcock told the Security Council this morning that, for more than 90 days now, bombing and shelling by the Government of Syria and the Russian Federation has produced carnage in the so-called de-escalation zone of Idlib. He noted that on the 26 of July, the Office of the High Commissioner for Human Rights identified at least 450 civilians who have been killed since late April - including more than a hundred in the last two weeks alone.
Mr. Lowcock said that, in spite of our efforts to work with parties to the conflict to prevent attacks on civilian objects and humanitarian workers, he has come to the conclusion that in the current environment, deconfliction is not proving effective in helping to protect those who utilize the system.
He added that some recent reports have claimed that UN humanitarian assistance reaches only those in areas not controlled by the Government and he asserted, “That is untrue. In fact, most of those reached with UN assistance are in areas under the control of the Government of Syria.”
Mr. Lowcock will speak to reporters at the Security Council stakeout shortly.
Highlights: 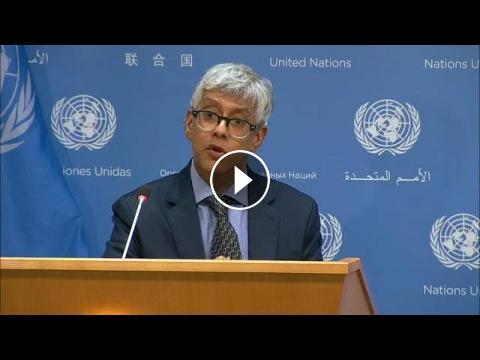