ava
Noon briefing by Farhan Haq, Deputy Spokesperson for the Secretary-General.
- Security Council
- Afghanistan
- Japan
- Syria
- Venezuela
- Bangladesh
- Zimbabwe
- Mozambique
- Contributions
SECURITY COUNCIL
This morning, the Secretary-General’s Special Representative and head of the UN Verification Mission in Colombia, Carlos Ruiz Massieu, briefed Security Council members.
He said that the peace process has had mixed results. On the one hand, efforts by the Government to advance the reintegration of former FARC-EP members have begun showing concrete results. On the other hand, security in conflict-affected areas remains of grave concern, and he emphasized the need for timely investigations into recent killings.
Mr. Ruiz Massieu also stressed that the great majority of former FARC-EP members remain strongly committed to the peace process and added that the support of the Government, local communities, and the international community has been instrumental in making this possible. He called for an increase in the number of productive projects for former combatants and for increased technical assistance and access to markets in order to ensure their sustainability.
In addition, he noted that the UN remains gravely concerned about the situation of social leaders and human rights defenders and said the work of the National Commission on Security Guarantees is essential to stop the threats and killings of this group of citizens.
Yesterday afternoon, the Security Council held an open meeting on the theme, “Peacebuilding and Sustaining Peace: Strengthening Partnerships for Successful Nationally-owned Transitions.”
Speaking at the meeting, the Secretary-General said that, while UN special political missions and peacekeeping operations are some of our most effective tools to promote and maintain international peace and security, they are temporary.
He said that we are strengthening our focus on moments of transition, when our missions are reconfigured or leave a country.
The Secretary-General said that the UN’s role in transition processes must be comprehensive and coherent. It must work in an integrated way to address the interlinked and often stubborn drivers of conflict: poverty, exclusion, inequality, discrimination and violations of human rights, exacerbated by climate change and the movement of people.
His full remarks are online.

AFGHANISTAN
The UN Mission in Afghanistan (UNAMA) reacted today to the attack that took place near Kabul University.
The deliberate targeting of educational facilities during armed conflict is a war crime, the mission said in a social media post.
Initial findings indicate that Kabul University was the intentional target of today’s attack. The blast killed 8 civilians and injured 33 more.

JAPAN
We issued a statement earlier on the Secretary-General’s sadness at the loss of life caused by the arson attack and fire in Kyoto, Japan. He extends his condolences to the families of the victims and to the people and the Government of Japan. He wishes those injured a swift recovery.
In this tragic moment, the United Nations stands in full solidarity with the Government and people of Japan.

SYRIA
In a press release today, Najat Rochdi, the Humanitarian Adviser to the Special Envoy for Syria, said that an alarming intensification of daily violence is continuing in northwestern Syria. At least 350 civilians are reported to have been killed in recent hostilities in the Idlib de-escalation area, she said, while some 3 million civilians lack protection and face a deteriorating humanitarian situation.
She added that attacks on civilian infrastructure, including health facilities, continue, with reports of 45 incidents impacting 35 health facilities already confirmed this year. Ms. Rochdi echoed the Secretary-General in his condemnation of such attacks, which recently included one of the largest hospitals in Maarat al Numan, whose coordinates had been shared with parties to the conflict through the UN de-confliction mechanism.
Yesterday, after he briefed the Security Council on Syria, the Emergency Relief Coordinator, Mark Lowcock, said that medical facilities and medical workers enjoy special protections under International Humanitarian Law. Civilians and civilian infrastructure require the protections afforded to them under International Humanitarian Law.  His press release on this is online.
Highlights: 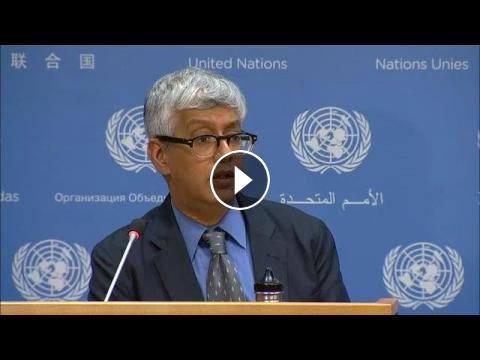