ava
Noon briefing by Stéphane Dujarric, Spokesman for the Secretary-General.
Highlights:
- Secretary-General’s trip
- Yemen
- Syria
- UN Resident Coordinators
- Greta Thunberg
- International Day Against Nuclear Tests
- Press Briefing
- Financial contribution
Secretary-General’s trip
The Secretary-General wrapped up his visit just now to Yokohama, Japan, where he took part in the 7th Tokyo International Conference on African Development, known as TICAD. He spoke at a thematic session on climate change and disaster risk reduction. The Secretary-General noted that Africa only contributes a small amount to climate change but is experiences the devastating consequences which is why he is convening his Climate Action Summit on September 23rd.
Throughout Africa, long-term drought is an ever-present and growing reality, which is directly implicated in causing insecurity as we see only too clearly in the Sahel, he said, adding that, it is always the case, that the poor and vulnerable are the first to suffer and the worst hit areas by climate impacts.
The Secretary-General underscored that, as well as tackling the causes of climate change, we must also leave nobody behind when dealing with its consequences.
Following this session, he spoke to reporters and expressed his deep appreciation to the Japanese Government for its commitment to African development, as exemplified by the holding of TICAD.
He pointed out that Africa faces a climate crisis, which requires a lot of political will to address and requires the strong commitment of governments, the private sector, and civil society.
Just before leaving Japan, he tweeted that he was now on his way to the Democratic Republic of the Congo to express both his strong support to those responding to the Ebola outbreak and his solidarity with the people and the Government of the DRC.
Syria
On Syria, in the Security Council, the Special Envoy for Syria, Geir Pedersen briefed Council members. He said that the scale of violence and stability in Syria is extremely alarming, with an ever-rising death toll and millions of people displaced. In Idlib, he said violence continues unabated, and stressed that counterterrorism tactics cannot put at risk the lives of 3 million civilians who have a right to protection under international humanitarian law. He emphasized that the solution to the situation in the country needs to be a political one.
Mr. Pedersen said tensions between Israel and Iran are “extremely worrying” and urged all parties to respect the sovereignty of Syria and all states in the areas, by showing maximum restraint, both in action and in rhetoric.
Mr. Pedersen who will be available to speak to you at the Council stakeout at about 1 p.m., we will make that announcement beforehand.
And the Under-Secretary-General for Humanitarian Affairs, Mark Lowcock also briefed Council members. And he said the UN is continuing to carry out relief operations and has reached 6 million people around the country this year. However, he said with less well funded than 2018 he appealed for countries who made pledges in the Brussels conference in April to take action to implement them.
Full Highlights: 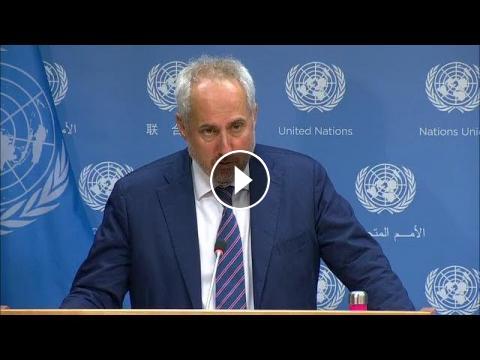