ava
Noon briefing by Farhan Haq, Deputy Spokesman for the United Nations Secretary-General.
Daily Noon Briefing:
- Yemen
- Syria
- Nigeria
- Appointment
- Honour Roll
YEMEN
In Yemen, the members of the Redeployment Coordination Committee (RCC) met for their fourth joint meeting on 16 and 17 February in Hudaydah city. They made important progress on planning for the redeployment of forces as envisaged in the Hudaydah Agreement.After lengthy but constructive discussions facilitated by the RCC Chair, Gen. Mark Lollesgaard, the parties reached an agreement on Phase 1 of the mutual redeployment of forces.
The parties also agreed, in principle, on Phase 2 of the mutual redeployment, pending additional consultations within their respective leadership. The next meeting of the Redeployment Coordination Committee is expected to convene within a week with the aim to finalize an agreement on Phase 2.

SYRIA
Our humanitarian colleagues remain concerned for the protection of civilians who remain trapped in the last Da’esh-held areas of Hajin, in Syria’s south-eastern Deir Ezzour Governorate and for those who are able to flee the fighting. Although fighting is reportedly less intense, there are continued reports of civilians being killed and injured. On Friday, a Syrian Arab Red Crescent convoy with six trucks loaded with UN and Red Cross/Red Crescent supplies reached Hajin town and distributed aid to 5,000 people. Yesterday, the UN and partners completed a food distribution to 15 towns and informal settlements in the eastern part of Deir Ezzour Governorate. The UN continues to call on all parties to the conflict to take all measures to protect civilians and civilian infrastructure in line with International Humanitarian and International Human Rights Law. And we continue to advocate that immediate assistance is provided to people fleeing Hajin, including critical medical assistance and the deployment of ambulances along the route, as well as to provide food, water and protection from the harsh weather.

NIGERIA
The Heads of the international election observation missions and the United Nations present in Nigeria, put out a joint statement over the weekend following the postponement of the elections in the country.
In it, they call on all Nigerians to continue to remain calm and supportive of the electoral process as the Independent National Electoral Commission (INEC) works to implement its new timeline.
They also urge the Independent National Electoral Commission to use this time to finalize all preparations and ensure that the new election dates are strictly adhered to.
Read More: 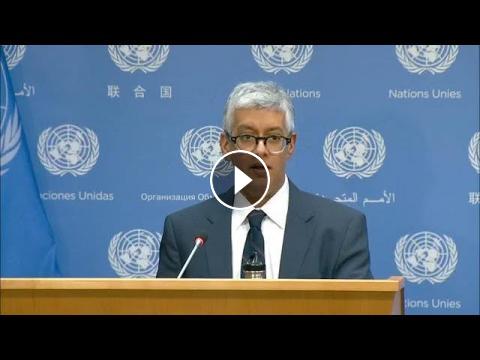