ava
Noon briefing by Farhan Haq, Deputy Spokesperson for the Secretary-General.
Daily Noon Briefing:
- Middle East
- Yukiya Amano
- Cyprus
- Libya
- Syria
- Nigeria
- Bangladesh
- Global Compact
MIDDLE EAST
The Under-Secretary-General for Political and Peacebuilding Affairs, Rosemary DiCarlo, told the Security Council this morning that the Israeli-Palestinian conflict continues to be locked in a dangerous paralysis that is fueling extremism and exacerbating tensions in Israel and the Occupied Palestinian Territory. She warned that there is a growing risk of more unilateral actions and the loss of hope that peace can be achieved through negotiations.
Ms. DiCarlo noted the demolition of housing in Sur Bahir by Israeli authorities yesterday, resulting in the displacement of 24 Palestinians, including 14 children, while the livelihoods of some 300 people were affected. As Deputy Special Coordinator Jamie McGoldrick stated yesterday, Israel’s policy of destroying Palestinian property is not compatible with its obligations under international humanitarian law and contributes to the [risk] of forcible transfer facing many Palestinians in the West Bank, including East Jerusalem.
Ms. DiCarlo briefed the Security Council on Gaza, saying that the UN continues to work closely with Egypt to mediate and de-escalate tensions there. While our joint efforts are beginning to bear fruit, she said that she remains deeply concerned by the humanitarian, economic and political situation there. The shortage of medicines, equipment and personnel continue to impede the ability of health providers to meet the needs of patients, including those severely injured during the weekly protests at the perimeter fence.

YUKIYA AMANO
In a statement issued yesterday afternoon, the Secretary-General said that he was deeply saddened this morning to learn of the passing of Mr. Yukiya Amano, Director-General of the International Atomic Energy Agency.
Through his stewardship of the International Atomic Energy Agency (IAEA), Director-General Amano worked tirelessly to ensure that nuclear energy is used only for peaceful purposes in leading IAEA in such an exemplary fashion, he advanced human well-being through efforts spanning medicine, agriculture and other vital areas.
Mr. Amano confronted serious global challenges, including those related to the proliferation of nuclear weapons, with equanimity and determination. Our world, the Secretary-General said, is so much better for it.
Full highlights: 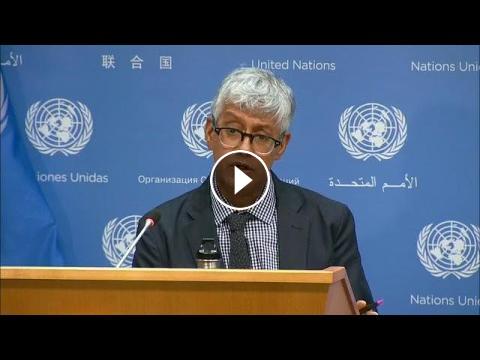