ava
Noon briefing by Farhan Haq, Deputy Spokesperson for the Secretary-General.
Highlights:
- Libya Migrants
- Security Council
- Syria
- Honduras
- Photo Exhibit
LIBYA MIGRANTS
The Secretary-General is deeply saddened by the news that some 150 refugees and migrants lost their lives after the boats they were in capsized off the coast of Libya on 25 July. Children and pregnant women are among the missing.
He is also concerned by reports that many of the survivors rescued by the Libyan coast guard were placed in the Tajoura migrant detention centre, which is close to a military facility and was hit by an airstrike on 2 July that resulted in more than 50 deaths.
The Secretary-General reiterates that Libya is not a safe country of asylum and that refugees must be treated with dignity and respect, and in accordance with international law.
In addition, the head of the UN Refugee Agency, Filippo Grandi, said this was the worst Mediterranean tragedy this year. In a social media post, he added that restoring rescue at sea, ending refugee and migrant detention in Libya and increasing safe pathways out of Libya must happen before it is too late for many more desperate people.
UNHCR urges States to come forward with additional help, including further resettlement places and other safe pathways out of Libya for people who are vulnerable and at risk.
In addition, UNHCR says more must be done to arrest and prosecute the ruthless traffickers and smugglers who profit from people’s desperation.

SECURITY COUNCIL
This morning, the Deputy Secretary-General, Amina Mohammed, briefed the Security Council on a recent visit to Afghanistan.
She began by offering her deepest condolences to the Government and people of Afghanistan following yesterday’s attacks.
Indiscriminate attacks that kill women and children are an affront to our humanity and a crime under international humanitarian law, she said. The United Nations stands with Afghans as they work for lasting peace and security.
Afghanistan is at an important crossroads, the Deputy Secretary-General told members of the Council. She welcomed the Government’s commitment to peace and to upholding the democratic rights of all Afghans. But she also reminded them that the voices of women, especially the victims must be heard at the table in the peace process and beyond.
The Under-Secretary-General for Peacebuilding and Political Affairs, Rosemary DiCarlo, had travelled with the Deputy Secretary-General. In her remarks to the Security Council this morning, she called on the Afghan people to hold a presidential election that will be credible and on time.
Highlights: 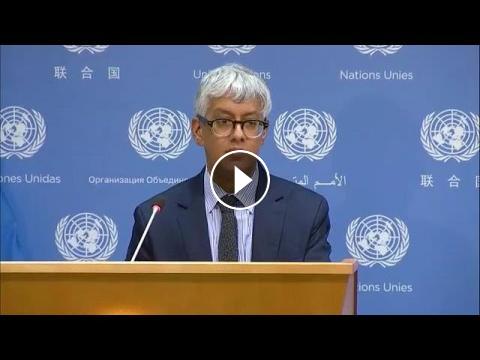