ava
Diébédo Francis Kéré, Architect from Burkina Faso, studied at the „Technische Universität Berlin". He focuses on education as the developing concept for his country, in which he has already built an essential infrastructure.

In the focus of Kéré's drafts are the climatic adaptation, low building costs and the self building: "The community needs to be educated how to monitor the climatic circumstances and to use local materials. Only people who take part in the building process can maintain and spread the word about these architectural projects." (1)

While he was studying, he founded the association "Schulbausteine für Gando e. V." for the funding of his first project, a Primary School in his native village. The building was finished in 2001 and received the Aga -- Khan -- Award for its exemplarity as well as its concise and elegant architecture using basic, constructive instruments. The school is the result of a vision, initially verbalized by the architect and realised by the community. The jury valued especially the great potential of a project which helps the community to develop a healthy pride and hope and creates at the same time a solid base for its development. The fact that Kéré built a Primary School for Gando exemplifies his commitment for education. To him, education is the foundation for every social, technical and economical development.

Meanwhile the Primary School was completed with the Teachers Housing, another school building and a library, sothat 900 children can go to school in Gando. Many young men were trained through construction and are now able to find qualified paied work far beyond the region.

Diébédo Francis Kéré connects research and experience as a lecturer at the "Technische Universität Berlin" and as an architect inhis own office. His research is contributed to the impartial development of strategies for architecture with local character. As an architect he defines himself as "a bridge between cultures, between the technically and economically developed countries of "the north" and the less developed African countries (the south)" (2)

(Excerpt from biographical materials provided by the architect.) 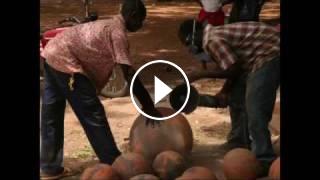 Diébédo Francis Kéré, Architect from Burkina Faso, studied at the „Technische Universität Berlin". He focuses on education as the developing conc...