ava
The United Nations Secretary-General António Guterres today said that “Member States must be on the frontlines in the fight against corruption. It is especially important to build up the capacity of national anti-corruption commissions and prosecutorial efforts.”
Addressing today (10 Sep) a Security Council meeting on corruption in conflict, UN chief António Guterres said Governments can “enhance anti-corruption efforts by ensuring independent judiciaries, a vibrant civil society, freedom of the media and effective whistleblower protections.”
Guterres noted that the international community can complement efforts by working more effectively against money laundering, tax evasion and the illicit financial flows that have deprived countries of much-needed resources.
He said, “I’ve called for heightened efforts to prevent conflict and to address risks early, before they escalate. In that spirit, combatting corruption and addressing governance challenges, which lie at the root of many conflicts, must be a component of preventive approaches. This is an opportunity to build a solid foundation of trust and accountability and increase a society’s resilience to crisis.”
The UN chief called on leaders to “listen, to nurture a culture of integrity and to empower citizens to do their part at the grass roots.”
He added “we must all do more to fight corruption, strengthen governance and build trustworthy institutions that can ensure probity and progress for all.”
The World Economic Forum estimates that the cost of corruption is at least 2.6 trillion dollars – or five per cent of global gross domestic product.
According to the World Bank, businesses and individuals pay more than one trillion dollars in bribes each year.
Screenshot Credit: UN Photo/Manuel Elias 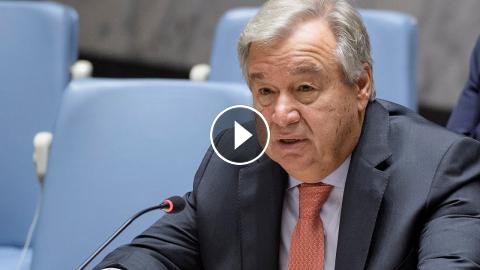 The United Nations Secretary-General António Guterres today said that “Member States must be on the frontlines in the fight against corruption. It is ...