Are you scared of using swear words in English? You often don’t understand these swear words when someone uses at you and are confused what they really mean. In this English lesson, you would learn what are swear words in English and what are the alternative words you could use in place of them. Swear words are rude and they could offend anyone. So, always be careful and avoid using them even when you are at the highest degree of your anger.

Watch the most liked lessons -

Fuck – The word fuck is also called the F word. So when you are angry and have to yell ‘Fuck’, you might say ‘fudge’, ‘Freak’, or ‘Flippin’

Shit – That’s the next most commonly used swear word in English. So you don’t have to say Shit, you could use the alternatives ‘Shoot’ or even ‘Crap’

Hell- Instead of using the word hell, you might want to try the word ‘Heck’

Son of a bitch- This is an extremely bad word even if you are really upset or angry. Avoid this swear word under all circumstances. Get rid of the word ‘Bitch’; replace it with ‘Gun’ – Son of a gun.

Jesus - And then, sometimes people say, like, Jesus, when they’re really frustrated about something, or they’re amazed by something, but you can say jeez/geez.

Holy shit- And then, the final one, some people say holy shit. So, holy is obviously something that’s very, like, religious, very sacred. So, you can say holy cow. 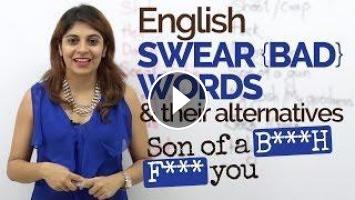