ava
Informal comments to the media by Jürgen Schulz, Deputy Permanent Representative of Germany to the United Nations, on behalf of the European Union members of the Security Council (Belgium, France, Germany, Poland and the United Kingdom) and Estonia as incoming EU member state on the Security Council, on the situation in Syria.
In a statement on behalf of the five current European members of the Security Council and Estonia as an incoming member, German ambassador Jürgen Schulz said the EU members were “deeply concerned by the Turkish military operation in Syria.” They called on Turkey to “cease the unilateral military action” adding that they not believe it will address Turkey’s “underlining security concerns.”
Schulz said, “Renewed armed hostilities in the northeast will further undermine the stability of the whole region, exacerbate civilian suffering and provoke further displacements which will further increase the number of refugees and IDPs in Syria and in the region.”
The German ambassador stressed that it was “unlikely that the so-called ‘safe zone’ in northeast Syria as envisaged by Turkey would satisfy international criteria for refugee return as laid down by UNHCR.” He maintained the EU position that refugee and IDP returns to their places of origin “must be safe, voluntary, and dignified when conditions allow” adding that any attempt at “demographic change is unacceptable.” Schulz added, “We want to be clear that EU will not provide stabilization or development assistance in areas where the rights of the local population are ignored.” 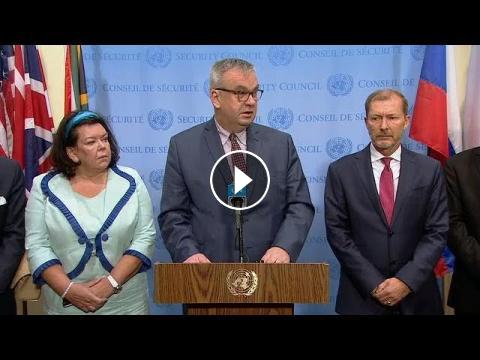 Informal comments to the media by Jürgen Schulz, Deputy Permanent Representative of Germany to the United Nations, on behalf of the European Union mem...