92 Views
admin
Imagine yourself in a concert hall. You close your eyes and let the sound of the orchestra onstage wash over you. You are transported by the sounds of Brahms, or Beethoven, or Mozart. When you open them, what do you see? In most cases, the faces of the musicians on stage are largely white, with a few exceptions.

The experience at the Gateways Music Festival is something entirely different. The musicians that make up the orchestra and the chamber music ensembles that are part of the six-day festival—all 125 of them—are of African descent. They are among the top musicians in their field, coming to the Eastman School of Music from orchestras, ensembles, and music schools throughout the United States and beyond.

While the organizers applaud efforts to make classical music more representative of the country as a whole, they are quick to point out that this is not a diversity initiative. Rather, this is about building community, offering a place for these musicians who are accustomed to being in the minority, and instead providing a venue to play music at the highest level, and focus on just the music. If in the process, they open some eyes about the number of professional classical musicians who look like them, that's a bonus. But the real goal is to inspire those in the audience by the power of the performance on the stage before them.

The festival was started in 1993 in Winton Salem, North Carolina by Armenta Adams Hummings Dumisani, who brought it to Rochester in 1994 when she joined the faculty at the Eastman School of Music. It has been here ever since, and now with Gateways and Eastman formalizing their partnership, organizers hope the growth will only continue. 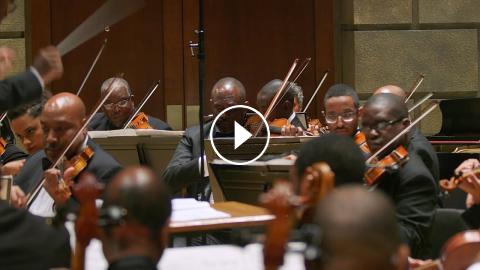 Imagine yourself in a concert hall. You close your eyes and let the sound of the orchestra onstage wash over you. You are transported by the sounds of...