For Jonathan Cruz, co-owner of Tacos & Tattoos Food + Culture, success isn't just about putting money in his pocket — it's about building a team that grows and thrives together. Cruz says he learned firsthand about the importance of teamwork while serving in the military. "Being in the Marine Corps was the best experience," he explains. "The discipline, the teamwork, the honor, the courage — everything. It's a family, a brotherhood, and it really inspired me to become a better boss for my employees and a better leader for my family."

Cruz started Tacos & Tattoos seven years ago and currently has four restaurants. His life in the Marines not only inspired his leadership style but it also influenced his menu. "It's a fusion of all the flavors that I've actually tried myself throughout the world." Cruz grew up in Puerto Rico, and was stationed in Japan, Europe, Africa, South and Central America. "I was stationed on the border for many years and I just fell in love with Mexican food. I decided that I just wanted to take all those flavors that I've tried and just put them on a taco shell."

Cruz credits his son with being the engine that put the idea into motion. "He wanted me to pursue my dream through him — he just loves the hospitality business." Also critical to Cruz's success is the relationship he has with his bank. He says, "Chase bank came into the picture maybe two years after we opened and we've been in this together ever since." According to Cruz, the bank immediately assigned a dedicated team to assist with their banking needs.

"It just brings [me] peace of mind and ease. Right now we're in the process of taking out a loan, and it was just a matter of a text, an email, simple forms, and it's already in process."

Cruz says that great relationships are essential to running a business because being an entrepreneur is far from simple. "Anyone thinking about becoming an entrepreneur, you need perseverance. This isn't going to be easy, but never give up. I'm lucky to have family, friends and partners that support me. And when you have that strong support system, you can make your dreams happen. It's not easy, but it'll make it happen."

Click here to learn more about the products and offerings Chase has for growing and managing small businesses.

For informational/educational purposes only: The views expressed in this article may differ from those of other employees and departments of JPMorgan Chase & Co. Views and strategies described may not be appropriate for everyone and are not intended as specific advice/recommendation for any individual. Information has been obtained from sources believed to be reliable, but JPMorgan Chase & Co. or its affiliates and/or subsidiaries do not warrant its completeness or accuracy. You should carefully consider your needs and objectives before making any decisions and consult the appropriate professional(s). Outlooks and past performance are not guarantees of future results. 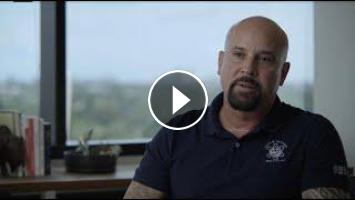