130 Views
admin
Hurricane Florence is heading for the US' East Coast.The governor of South Carolina has ordered the evacuation of its entire coastline. Meanwhile North Carolina and Virginia have declared states of emergency. Florence is now a category four storm with 130mph (195km/h) winds. It may be the strongest storm to hit in decades.
The story
A large-scale evacuation is underway in the United States as the East Coast braces for Hurricane Florence in what may be the strongest storm to hit the region in decades.
South Carolina's governor ordered the evacuation of its entire coastline, involving over a million people, while North Carolina and Virginia have declared states of emergency.
It's expected to make landfall by Thursday.
Key words and phrases
menace
threaten to hurt
•Storms often menace coastal regions from August to October.
•Why must you always be a menace to your sister? Please behave nicely.
churning
moving violently (of a liquid)
•The new wave machine began churning the water in the indoor swimming pool.
•Kim drives so fast! After being in the car with her, my stomach was churning.
lurking
waiting to attack
•The boy went quietly to the village. He knew there was a lion lurking nearby.
•I love you, but I'm not going to marry you, Ismael. Stop lurking outside my door!
[Cover image: GETTY IMAGES]
Do you want to learn how to speak English? Then join us here on YouTube for great grammar, drama, news, study, pronunciation, vocabulary, music, interviews and celebrity videos. Every day we have a new video to help you with English. We also produce regular 'extra' videos across the week so come back every day to see what's new.
MONDAY: The English We Speak
TUESDAY: News Review
WEDNESDAY: LingoHack
THURSDAY: 6 Minute English
FRIDAY: The Experiment (watch this space for new and exciting content that we are trying out!)
Please use English when you comment.
For more videos and content that will help you learn English, visit our website: 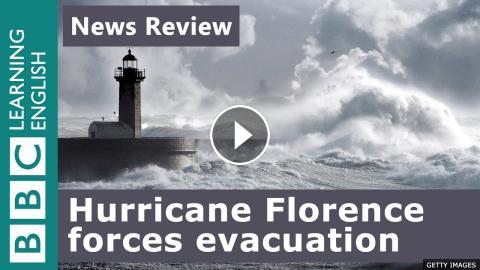 Hurricane Florence is heading for the US' East Coast.The governor of South Carolina has ordered the evacuation of its entire coastline. Meanwhile Nort...