ava
You know, before we get to the comparison, how about if you walk with me down memory lane. Remember that time in November 2007 when Sergey introduced us to Android? (Sergey Video) This barebones video was a reaction to project Purple which we all know as one of the most iconic keynotes by Steve Jobs in January of that same year (An iPod, a Phone.. Are you getting it? These are not three separate devices, it's just one device and we're calling it iPhone)

What's interesting is to see Google playing catchup to a party they weren't really late for. Not sure if you knew but the company originally acquired Android two years earlier, which if you do the math, is about the time Apple began one of their most secretive projects ever. Heck, I don't even know how Steve managed to keep the iPhone a secret from Eric Schmidt, who sat on Apple's board, all while being Google's CEO.

Why does this matter? Because if you see Google's first prototype for Android, code-named The Sooner, it was built around competing with BlackBerry and Windows Mobile. It's clear that Google knew that project had to be scrapped in January, because that second prototype code-named the Dream was such a last minute scramble, that it took Google a full extra year to go from that basic mess to what we knew as the HTC Dream, AKA T-Mobile G1.

Nearly 15 years have passed, and it seems Google keeps playing this same catch-up game. First it was only a software partner, but then built the Nexus One in 2010. Then that whole project got shelved for the Pixel, all while Apple's 15-year formula continues to stand strong. Yes, that's how long this rivalry disguised in partnership has lasted, and yet I think this is the first time that Google has figured itself out enough to not just compete, but win.

On one corner we have the iPhone 13 Pro Max, Apple's best iPhone ever, and also a showcase of excess to all the company's capabilities. On the other we have the Pixel 6 Pro, the best phone Google has ever made, and a very important step into the character the company needed. I'm Jaime Rivera with Pocketnow, and let's dive in to this interesting comparison. 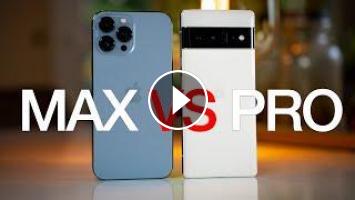 You know, before we get to the comparison, how about if you walk with me down memory lane. Remember that time in November 2007 when Sergey introduced ...