ava
Lecce, the "baroque capital of Italy" is an unique architectural ensemble from the 16th to the 18th century and was a fascinating centre already in ancient times. Conquered by the Romans in the 3rd century B.C., it was called Lupiae. Later the Order of the Jesuits built its churches here.

In the centre of the town are the church of Santa Irene of Lecce, the Bishops Palace and the Pallazzo del Seminario and the Cathedral Santa Maria dell’Assunta. Guiseppe Here, Zimbalo with his large team of handicraft artists created a magnificent church building. In the inside the baroque splendour knows no bounds.

The Basilica Santa Croce is called the “Triumph of Baroque” and was also built by G. Zimbalo.

The Amphitheatre, built in the 2nd century under Hadrian, is in the middle of the city centre. So far only half of this ancient site has been uncovered. A large part of the Piazza Sant'Oronzo is therefore no longer available. But nowadays in summer, events are staged here, and the Roman theatre becomes an open-air stage.

Squeezed into the narrow streets, the magnificent baroque façade of the church Santa Chiara surprisingly appears. The church of San Matteo with its original façade is worth seeing.

In the 16th century on the remains of a Norman fortress, the Castello, was built to defend against Ottoman attacks by order of Charles the Fifth. The baroque Lecce had to be protected. A splendour created by the great artists of the time.
--------------
Watch more travel videos ► https://goo.gl/MXPgSs
Join us. Subscribe now! ► https://goo.gl/awdDrh

Thanks for all your support, rating the video and leaving a comment is always appreciated!
Please: respect each other in the comments.

Expoza Travel is taking you on a journey to the earth's most beautiful and fascinating places. Get inspiration and essentials with our travel guide videos and documentaries for your next trip, holiday, vacation or simply enjoy and get tips about all the beauty in the world...

It is yours to discover! 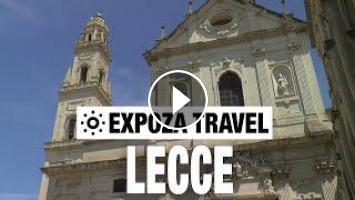 Lecce, the "baroque capital of Italy" is an unique architectural ensemble from the 16th to the 18th century and was a fascinating centre alr...