Legacies of Enslavement at Cambridge

ava
This film responds to a University of Cambridge investigation into the institution’s historical links to the Atlantic slave trade, a summary of which was made public in September 2022.
The report commissioned by the University indicates that Cambridge was implicated in enslavement in a number of ways including investing in the Atlantic slave trade; receiving benefactions based on income derived from the slave trade; educating wealthy slave estate owners’ sons; and academics supporting the proslavery movement.
The University will now begin to implement the summary report’s recommendations by creating a Cambridge Legacies of Enslavement Fund which will be put towards research, community engagement and partnership activities.
The Advisory Group on the Legacies of Enslavement was created in 2019 at the request of the Vice-Chancellor, Professor Stephen J Toope, in light of the growing public interest in the issue of British universities’ historical links to enslavement and the slave trade. It was asked to advise him on Cambridge’s historical links and on the legacies of those links, and to propose future action in the light of this.
Cambridge, like many other British and North American institutions, benefited both directly and indirectly from enslavement, the slave trade, and imperialism more broadly. Cambridge’s inquiry follows in the footsteps of various British institutions including the Church of England, the Bank of England, the National Trust and other universities, both in Britain and North America.
Speakers in this film include the University’s Vice-Chancellor Professor Stephen J Toope; Pro-Vice-Chancellor (University Community and Engagement) Professor Kamal Munir; Lord Simon Woolley (Principal of Homerton College); Tyra Amofah-Akardom (MPhil student and co-creator of The Black Advisory Hub); and members of The Legacies of Enslavement Advisory Group: Professors Martin Millett, Nicholas Guyatt and Sujit Sivasundaram.

Legacies of Enslavement at Cambridge 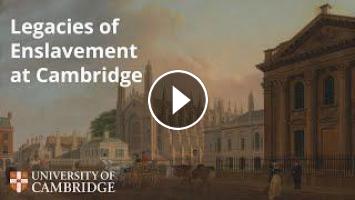 This film responds to a University of Cambridge investigation into the institution’s historical links to the Atlantic slave trade, a summary of which ...