ava
A cyber attack on an underground nuclear site in Iran has left new advanced machines, known as centrifuges, no longer working. The Iranian foreign minister has said his country will "take revenge" on the perpetrators and has blamed Israel for a cyber attack. Neil and Catherine have the vocabulary you need to talk about this story.

The story
As soon as it emerged there had been some kind of problem at the Natanz facility, speculation arose as to what might have caused it.

Now the head of Iran’s atomic agency, Ali Akbar Salehi, has called it nuclear terrorism – saying that Iran reserves the right to take action against the perpetrators.

Key words and phrases:
sabotage
deliberate destruction of something to prevent a competitor’s success

The former leader set up a new party to sabotage his former colleagues’ attempt to win a majority.

In an act of sabotage, I poured salt into my rival's cake in the baking
competition.

outage
period when a service, often electrical, is not working

All the clocks are wrong. There must have been an outage earlier.

All these power outages are costing the economy millions.

I felt better when he gave me an ironclad assurance he’d help me.

Can you give me an ironclad guarantee that you won’t do that again? 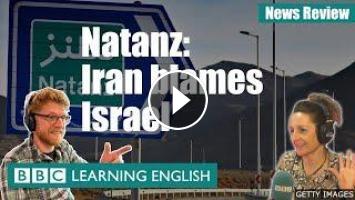 A cyber attack on an underground nuclear site in Iran has left new advanced machines, known as centrifuges, no longer working. The Iranian foreign min...