175 Views
admin
Stories:
- Apple slows iOS 9.3 release as it catches up to problems
- All-new Project Ara website draws attention to radio silence
- Google is rumored to go after Periscope and Facebook Live soon with YouTube Connect
- Samsung’s new in-testing Galaxy Active may be known as the Samsung Poseidon
- Purported OnePlus 3 benchmark reveals Snapdragon 820, 16MP camera
Watch today's Pocketnow Daily as we talk about Apple's flop with the launch of iOS 9.3. Then discussion shifts to Project Ara as Google has decided to bring it back from the dark. Then we hear of Google's possible YouTube Connect project in order to compete with Periscope. Samsung follows as we hear of the codename of the Galaxy S7 Active, bringing revealing details. We end today's show talking about the OnePlus 3 and its possible specs.
All this and more after the break.
Subscribe:
About us:
Pocketnow has been a key source of mobile technology news and reviews since its establishment in 2000. With offices on three continents, Pocketnow offers round-the-clock coverage of the mobile technology landscape, from smartphones to tablets to wearables. We aim to be your number-one source for mobile tech news, reviews, comparisons, and commentary. If you love mobile as much as we do, be sure to subscribe!
Follow us: 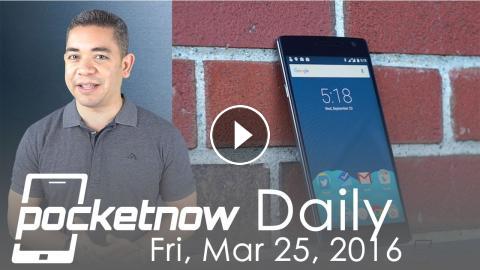