85 Views
admin
Watch today's Pocketnow Daily as we talk about the Galaxy S10 and the possibility of it having three cameras, to help with sales and finally change the design. Then we talk about the fact that Apple is not releasing any hardware besides a speaker at WWDC instead they will focus on software and leave products like the iPhone SE 2 for later. The Galaxy Note 9 which is rumored to launch around July will be delayed for a couple of weeks are they are making it slimmer. Then we move on to Apple rebranding their HomePod as a Beats speaker that will sell for $250. We end today's show talking about deals for the Sony Xperia XA1.
All this and more after the break.
Stories:
-Huawei Mate 10 Pro giveaway
-Samsung is reportedly ‘considering’ triple cameras and a 3D sensor for next year’s Galaxy S10
-Apple’s WWDC 2018 to be entirely software-focused, no new iPads or MacBooks in store
-Two extra weeks for Galaxy Note 9 to make it thinner
-$250 Beats-branded Siri speaker tipped as Apple’s only WWDC 2018 hardware launch
-This might be your last chance to score a respectable Sony Xperia XA1 for a crazy low $180
Subscribe:
Graphics provided by: Motionvfx.com
About us:
Pocketnow has been a key source of mobile technology news and reviews since its establishment in 2000. With offices on three continents, Pocketnow offers round-the-clock coverage of the mobile technology landscape, from smartphones to tablets to wearables. We aim to be your number-one source for mobile tech news, reviews, comparisons, and commentary. If you love mobile as much as we do, be sure to subscribe!
Follow us: 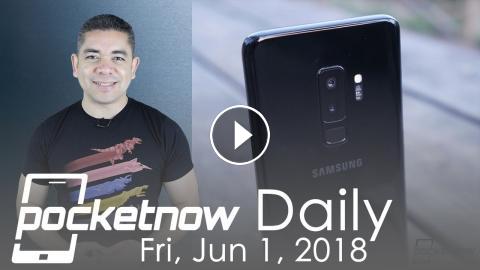 Watch today's Pocketnow Daily as we talk about the Galaxy S10 and the possibility of it having three cameras, to help with sales and finally change th...