128 Views
admin
Stories:
- We’re going to get to see the Huawei P10 at MWC 2017
- HTC One still alive as it streamlines releases
- Google Maps integrates Uber functionality directly into its directions
- Apple closes in on historic $1 trillion total revenue from iOS ’empire’
- Alleged Samsung Galaxy S8 case renders preview several design tweaks, headphone jack still in tow
- New high-res Samsung Galaxy S8 Edge case renders crop up, missing home button
Watch today's Pocketnow Daily as we talk about the rumors surrounding the Huawei P10 for MWC 2017. Then we discuss the HTC One successor, as it seems the U Ultra isn't going to be alone. Google Maps follows as we learn that its integration to Uber is now better than expected. Apple follows as we see how the company has managed to snag nearly $1 Trillion in revenue on the iPhone alone. We end today's show talking about the Samsung Galaxy S8 Edge, and its new design changes.
All this and more after the break.
Subscribe:
About us:
Pocketnow has been a key source of mobile technology news and reviews since its establishment in 2000. With offices on three continents, Pocketnow offers round-the-clock coverage of the mobile technology landscape, from smartphones to tablets to wearables. We aim to be your number-one source for mobile tech news, reviews, comparisons, and commentary. If you love mobile as much as we do, be sure to subscribe!
Follow us: 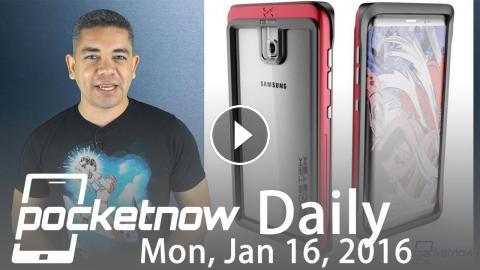 Stories:- We’re going to get to see the Huawei P10 at MWC 2017 - HTC One still alive as it streamlines releases - Google Maps integrates Uber function...