ava
On his first day holding the presidency of the Security Council, South African Ambassador Jerry Matthews today (1 Oct) told reporters that he does not expect “in the near future there will be a joint statement on Jammu and Kashmir” in the Council.
Matthews noted that he was aware of the views expressed by India and Pakistan during last week’s General Assembly’ general debate and expressed hope “that the situation will be resolved amicably for the both sides.”
On the Israeli-Palestinian question, the South African Ambassador appealed for Palestinian unity.
He said, “Fatah and Hamas have to unite. Must close the ranks. And the neighbouring countries have to unite and close ranks. We still believe it is possible to have a two-state solution. Because all of us, we also need a secure Israel.”
On peace and security threats in West Africa, Matthews said, the emergence of radicalized groups that are “mobile, hectic, more vicious than before,” is also “complicated by communal violence.”
He said, “these twin things have then said to the UN, you have to rethink the deployment composition and structure of peacekeeping. So, we are now looking into how do we reconfigure the peacekeeping forces to respond to these new threats posed by what is happening.”
During the South African presidency, the Council will convene a meeting on preventive diplomacy. Matthews said, “we thought the Secretary-General and some leaders from Africa could share the experiences in managing differences, in sitting down and having a dialogue to resolve their problems.”
In the context of the situation of Egypt, following two weeks of nationwide demonstrations against Egyptian President Abdel Fattah al-Sisi, he said, “we know that the colleagues in Egypt will do the same. They will sit down resolve the issues. Because what bothers the Council, is that these issues are manageable, can be resolved. But maybe we need to encourage parties to sit and talk.”
South Africa will hold the rotating presidency of the Council for the month of October. 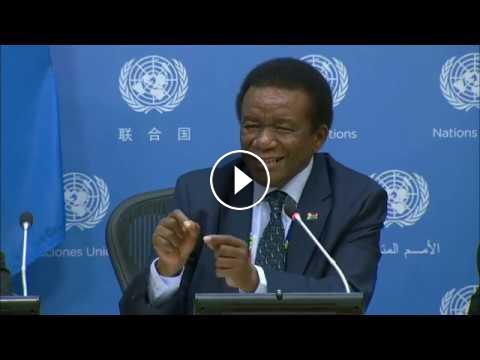 On his first day holding the presidency of the Security Council, South African Ambassador Jerry Matthews today (1 Oct) told reporters that he does not...