ava
For the cofounder of Asian-inspired restaurant chain Chicken Meets Rice (@chickenmeetsrice) Shone Tran, a night out drinking with a friend and eventual business partner led to much more than memories of laughter and great conversations. Watch this interview to learn about pulling inspiration from tragedy, taking small steps, and thriving in business with your best friend.

• Improve Your Restaurant with Toast: https://bit.ly/3vpeVsc

Shone Tran is a Restaurant Influencer —

There’s a saying that goes: “a drunk mind speaks a sober heart”. Before co-founding his own fast-casual restaurant company, Shone Tran remembers a fateful evening while out bar hopping in Brooklyn’s Williamsburg neighborhood in NYC.

“We walked by this one Asian restaurant, and we went in and probably ordered three or four different things, one of which was Chinese chicken rice,” Shone Tran remenisced on the Restaurant Influencers podcast hosted by Shawn P. Walchef of https://calibbq.media.
“The whole time Jon (Sujarit) and I were, he was telling me about the Thai version of this dish that he grew up eating. And I would tell him about how I always ate the Chinese and Vietnamese versions of this dish growing up all my life. And so we just remember thinking to ourselves, man, this dish would kill it, you know, as a concept back home in the Bay Area.”
Remember the “drunk mind” quote mentioned earlier?

That night, the sober heart involved the realization that they had a great idea on their hands. One they could actually execute because they had the magic elixir of first-hand experience, idea starting point, and inebriated courage.

Without any advertising and no marketing, Chicken Meets Rice eventually opened its doors. “We had literally five people and we opened up.” Shone Tran says of their first day. “We thought that we would not even sell 20 boxes that day because we did zero advertising. It was a soft opening. We were going to open at 11:30 a.m. that day and no joke at 11 there were probably already 30 people in line waiting to see what this new spot is about.”

The excitement garnered from Chicken Meets Rice's first day was the validation for Tran that he and his best friend made the correct decision to follow up on their conversation after a fun night out in New York.
Now, a partnership with famed 99 Ranch Market in hand, Tran and Chicken Meets Rice is looking forward to growing the awareness and expanding to become a national chain. “Five years from now,” Shone Tran says, “Chicken Meets Rice will be a national franchise with at least 100 locations across the US.” That will be quite the story to tell.

NOMINATE A RESTAURANT INFLUENCER — Do you know someone or a restaurant who is great on social media? Let us know by emailing [email protected] or sending the @calibbqmedia team a DM on social media.

ABOUT SHONE TRAN (@chickenmeetsrice):
Shone Tran is the co-founder of Chicken Meets Rice, which started after a night out with his best friend and ended with a stop at an Asian takeout restaurant. The food sparked a conversation about bringing the cuisine back with them to the Bay Area. News of an impending tragedy created a sense of urgency, and after testing recipes on friends, Tran left his job in tech for restaurant entrepreneurship. Now, with plans to open 100 locations over the next five years, Shone Tran and Chicken Meets Rice has the momentum to do just that.
• Shone Tran on LinkedIn - https://www.linkedin.com/in/shonetran/

ABOUT RESTAURANT INFLUENCERS:
Welcome to the Restaurant Influencers podcast and video series. Every week host and restaurant owner Shawn P. Walchef (@shawnpwalchef) talks with leaders about their secrets to Smartphone Storytelling and how to show up and engage where customers are spending time online. https://restaurantinfluencers.media

Restaurant Influencers is brought to you by Toast, the powerful restaurant point of sale and management system that helps restaurants improve operations, increase sales and create a better guest experience.

• Learn more about Toast at https://bit.ly/3vpeVsc 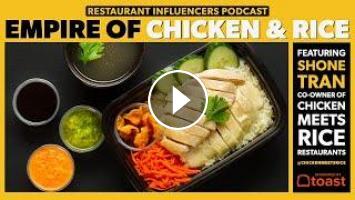 For the cofounder of Asian-inspired restaurant chain Chicken Meets Rice (@chickenmeetsrice) Shone Tran, a night out drinking with a friend and eventua...