ava
Informal comments to the media by Mr. Staffan de Mistura, Special Envoy of the Secretary-General for Syria, on the situation in the Middle East.
The United Nations Special Envoy for Syria, Staffan de Mistura, today (17 Oct) told the Security Council that “a catastrophe has so far been averted” in the Syrian province of Idlib, as the Russian-Turkish memorandum of understanding “appears to be being implemented.”
De Mistura said “the de facto map of Syria today is for the moment relatively stable, but it must not become a de facto soft partition, nor a theatre for new international confrontations” and stressed that “there must therefore be a political path forward.”
The Special Envoy expressed hope that progress would be made on a fresh constitutional settlement for a post-war Syria. He said, “the UN has done all that it can, and frankly more, to find a way to convene a credible and balanced constitutional committee. We are ready to do more and in an accelerated way during the forthcoming month, taking advantage of the Idlib window of opportunity, but we are not ready to convene a committee that is not credible and balanced.”
De Mistura announced that “for purely personal reasons” he will step down from his post in the last week of November 2018, adding that his intention, “is to dedicate this crucial last month to actively verify once for all the feasibility of the implementation of a credible and inclusive constitutional committee, and hence also the implementation of the Sochi declaration.”
In his address to the Council, Syrian Ambassador Bashar Ja'afari objected to the formation of the “Third Group” in the negotiations leading to the establishment of the constitutional committee. He said the United Nations “must not be part of any political groups that stand against Syria and the Syrian government because these groups are being created outside the authority of the Security Council by political powers that support terrorism in Syria and in the region.”
Outside the Council, Swedish Ambassador Olof Skoog, speaking on behalf of the European Union, acknowledged “the signing of the memorandum of understanding to establish a ceasefire in Idlib and we call on the Astana guarantors to ensure that the ceasefire is upheld and to safeguard the last remaining de-escalation zone in Syria.”
The ambassadors emphasized “the need for a comprehensive nationwide ceasefire and for safe, sustained, and unhindered humanitarian access throughout the country.”
Also speaking to reporters, de Mistura said objections from Damascus were holding up the committee’s launch.
He said “if there is a political will, there is no reason, no reason whatsoever for the constitutional committee not to be able to be convened during the month of November. We are ready. We have done a lot of homework. Ten months of preparation. The main reason so far for the delay in conveying in Geneva the constitutional committee is frankly the difficulties that the government of Syria has to accept the current third list that has been prepared by the UN as per the Sochi declaration and the resolution 2254.” 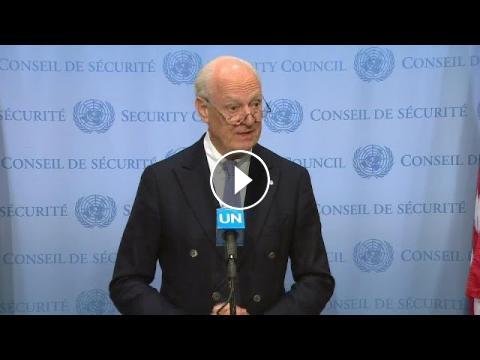 Informal comments to the media by Mr. Staffan de Mistura, Special Envoy of the Secretary-General for Syria, on the situation in the Middle East.The Un...